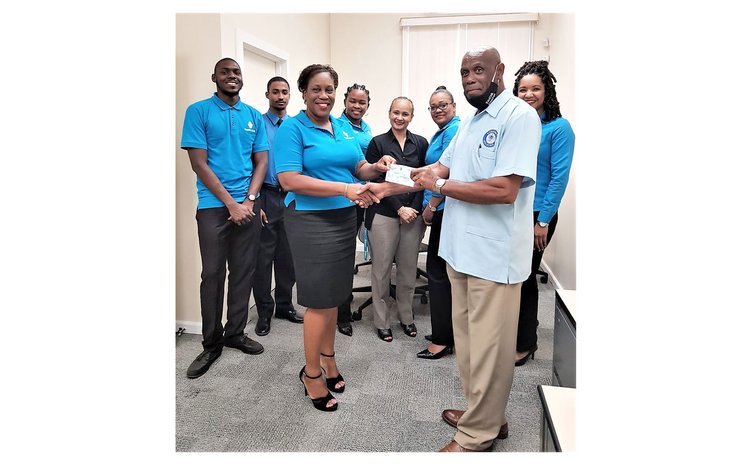 Roseau, Dominica. 26 March 2021- With the help of the staff of one of Dominica's banks, the management of Home for the Homeless can now meet some of the financial obligations of the institution.

The staff of the Republic Bank (EC) Limited, Dominica (RBEC), on Friday, March 26, 2021, made a contribution of EC$2,037.60 to the Grotto Home for the Homeless, a decades-old institution managed by Community Hostel Inc.

"We were in a really tight squeeze," said Ainsworth Irish, the president of the Grotto Home for the Homeless (GHH) at a short ceremony at the Republic Bank to hand-over the donation. "We are extremely delighted for this tangible donation which I can tell you exceeded my expectations. It will go a long way."

In October 2020, the staff of RBEC launched a voluntary programme named "Beyond the Walls" aimed at enabling staff, as individuals, to make personal contributions to the wider community.

Because of the plight the GHH is currently facing, the staff decided to make a personal contribution to the Home.

At the ceremony, Irish said the GHH caters for 40 destitute persons. The residents are given three hot meals daily. There are ten members of staff who assist with the preparation of the meals and the daily upkeep of the Home.

Irish added that Government provides the Home with a subvention of EC$65,000 annually but EC$169,000 is needed to adequately manage Grotto.

According to Irish, "over the last six months, for some reason, the paupers allowance of EC$5,400 was stopped" which placed Grotto management in a "really tight squeeze".

However, the matter was resolved when Irish visited the Prime Minister and a cheque of EC$32,000 was issued. This enabled DHH to pay salaries that were unpaid for two months and to meet other outstanding debts.

Irish said the donation from the Republic Bank is timely as it will also assist in paying outstanding bills. He says Jolly's Pharmacy gives the Grotto credit up to EC$1,500 for the purchase of medication for the Grotto residents. However, the institution was over that amount and was currently owing in excess of EC$3,000.

Irish described the donation as "a noble exercise in light of the global pandemic" and the fact that institutions now have limited resources to donate.

From the funds he received from the staff of Republic Bank Irish said he planed on giving Jolly's Pharmacy 50% of the amount; he also intends to pay bills at Green's Supermarket.

Irish said he fervently hopes the Government of Dominica would continue the paupers allowance and other individuals would follow the footsteps of the Republic Bank staff and assist GHH.

Commenting on the gesture by the RBEC staff, Country Manager of Republic Bank (EC) Limited Dominica, Gina Severin, said Republic Bank and employees, like other commercial and private sector organizations and staff, have their fundamental core and critical mission functions to perform in the interest of the business.

"But we are equally cognizant of the fact that we exist within a community and for the community," Severin said. "To all intents and purposes, the community is our raisons d'être and so it was not difficult for us to fully embrace the idea brought on by our Manager Service & Support, Kasia John, of contributing to such a worthy effort which cannot be reduced to merely dollars and cents. Love, care and selflessness are priceless and our employees are happy to embody these values in this gesture".