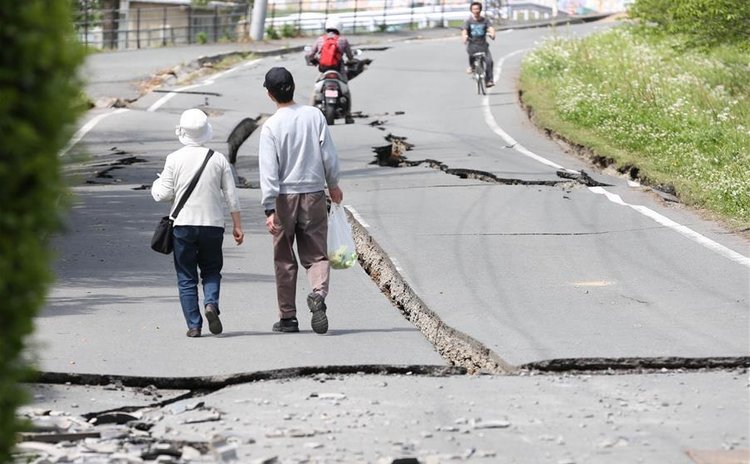 KUMAMOTO, April 16, 2016 (Xinhua) -- Residents walk on a street cracked by the earthquake in Mashiki, Kumamoto prefecture in southwestern Japan, April 16, 2016.

TOKYO, April 15 (Xinhua) -- A powerful earthquake that rocked southwestern Japan on Thursday night has left nine people dead so far and hundreds injured as emergency Self-Defense Force personnel have been rapidly deployed to the region to help with ongoing search and rescue efforts.

Prime Minister Shinzo Abe told a press briefing that the government will do everything in its power to support the victims of the quake and ensure emergency provisions such as food, water and medical assistance are on hand to those who need it.

A disaster response team has been set up at the prime minister's office and response efforts are being coordinated from there. Abe said that he is in touch with Kumamoto's governor and will work closely with the quake-hit prefecture to coordinate operations.

The Japanese leader told a lower house session on Friday the government would do its utmost to help local residents.

"We will do our best in ensuring the safety of residents," the prime minister said.

"In collaboration with local authorities, we will take every possible measure to support sufferers such as securing food, blankets and other necessary materials, providing medical services, as well as restoring infrastructure such as electricity and water supply," said Abe.

The magnitude-6.5 earthquake that struck at 9:26 p.m. measured 7 on Japan's seismic scale, the highest possible reading for an earthquake, and marking the first time a temblor in Japan has hit the peak on the scale since the devastating quake in Tohoku in 2011 that along with an ensuing tsunami killed nearly 16,000 people.

The town of Mashiki, home to more than 32,600 people in Kumamoto Prefecture, in southern Kyushu, was where the quake hit hardest and was logged at an intensity of 7, although the Japan Meteorological Agency did not issue a tsunami warning.

The shallow quake which originated at a depth of around 11 kilometers and was followed by 123 aftershocks according to the weather agency on Friday morning, some measuring in the upper six range on Japan's scale, left nine people dead. Three of the deceased were men and the four were women, local officials have confirmed.

They said those who were killed were from the town of Mashiki and also from the Higashi Ward of Kumamoto City. Local police and firefighters in the prefecture said that 20 houses had collapsed as a result of the quake, particularly in and around Mashiki, leaving people trapped beneath rubble and fallen debris.

Firefighters had also been busy battling blazes in Mashiki that were triggered by the deadly quake, and one person is believed to have died in one of the fires, officials said.

As many as 950 people, according to public broadcaster NHK, were injured in the quake and the aftershocks, more than 50 of whom are suffering with severe injuries.

Some 44,400 people were forced to evacuate their homes and take shelter in 500 temporary sites in the prefecture, Kumamoto officials said, with town authorities being forced to transfer their emergency operations headquarters to a temporary evacuation facility, as electricity has been knocked out by the quake, further compounding the unfolding crisis.

Prefectural officials said, however, that no abnormalities had been noticed at any of the nuclear facilities in the quake-affected areas.

Kyushu Electric Power Company said that its No.1 and No.2 reactors at its Sendai nuclear power plant in Satsuma-Sendai City, in the quake-hit prefecture, were functioning normally. The two are the only reactors currently online in Japan.

The majority of Japan's nuclear power plants remain offline for regular safety inspections and in the wake of the massive earthquake-triggered tsunami in March 2011, that pummeled the Daiichi nuclear facility in Fukushima Prefecture, in Japan's northeast, leading to the worst commercial nuclear crisis in history.

Japan's National Police Agency has sent 1,084 officers from 19 local police departments to the disaster-hit regions, while the Defense Ministry has deployed an emergency contingent of 1,600 SDF personnel to Kumamoto, mainly to Mashiki, where search and rescue operations are ongoing and teams are handing out emergency food and water to queues of people who have fled their homes, as well as providing emergency medical treatment to those in need on the spot.

Kyushu Railway Company, known here as JR Kyushu, has suspended the operation of its Shinkansen bullet train services due to the multiple aftershocks, which saw one of its trains derailed. The train was out of service at the time and no one was injured as a result.

The transport ministry also said that traffic in the region has been widely disrupted as portions of the Kyushu Expressway and the Minami Kyushu Expressway have been closed. In addition, at least four flights to and from Kumamoto airport have been cancelled, with others being delayed, the ministry said.

The airport itself is located in the hardest-hit town of Mashiki.