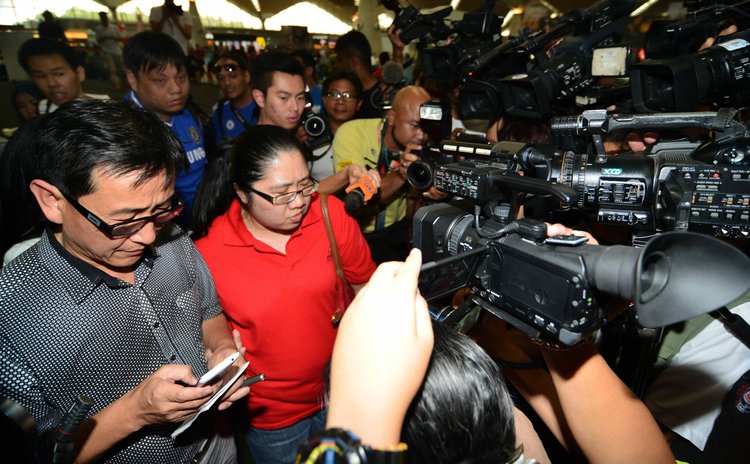 "The oil spills are suspicious but the (search) plane could not reduce height at the time. We are sending rescue ships to the area," he said, adding search aircraft had returned to base because it was now too dark.

No wreckage of the aircraft has yet been spotted.

He said Malaysia had dispatched 15 planes and nine ships to the area, and the U.S. Navy was sending aircraft as well. Singapore, China, Thailand and Vietnam also were sending aircraft.

"The search for MH370 is still ongoing. We are focusing on the area where the last signal was detected but we have yet to find anything," Najib told a news conference Saturday evening.

He dismissed the possibility of a terrorist attack being responsible for the Boeing 777's disappearance. "We are looking at all possibilities and it is too early to speculate on what happened," he said.

Premier Li said the flight, which went missing early Saturday morning, carried 154 Chinese passengers and the Chinese government and people were deeply concerned about the safety of all 239 people onboard.

"Time is life, and human life is above all else," Li said, adding the top priority now was to swiftly find out the facts and intensify search and rescue efforts.

Malaysia Airlines said on its website 12 crew members and 227 passengers were on the flight, including 154 Chinese and 38 Malaysians.

"The last known position of MH370 before it disappeared off the radar was 065515 North (longitude) and 1033443 East (latitude)," Malaysia Airlines said in its latest statement.

"We have contacted both the Malaysian and Vietnamese authorities as it is actually the borderline of Malaysian airspace and Vietnam," he told a press conference, adding there had been no indication the plane was in distress.

Another mystery to emerge amid the drama involved Italian passenger Luigi Maraldi, whose name was on the missing jet's boarding list provided by Malaysia Airlines. But Italy's Foreign Ministry confirmed Saturday that Maraldi was not on board.

Maraldi phoned his father Walter, a resident of Cesena in Italy, in the early morning Saturday to tell him he was not on the missing plane but safely in Thailand, the father said when interviewed by local media.

An Austrian, whose name was also on the boarding list of MH370, had his passport stolen as well.

The Austrian Foreign Ministry said that man was safe at home.

Malaysian Transport Minister Hishamuddin Hussein said no sign of any plane wreckage had been found, denying earlier media reports the plane had crashed south of an island off Vietnam.

Hishamuddin said the Malaysian government had contacted the departments of maritime affairs in China, Vietnam, the Philippines and Indonesia to jointly search for the vanished plane.

Chinese President Xi Jinping on Saturday stressed all-out efforts must be made for any emergency treatment necessary in the aftermath of the incident.

Xi ordered the Ministry of Foreign Affairs and Chinese embassies and consulates to strengthen contact with authorities in the countries involved and pay close attention to the search and rescue work.

The Ministry of Transport and the Civil Aviation Administration must launch emergency measures immediately and enhance security checks to ensure the "absolute safety" of China's civil aviation operation, according to the president.

The ministry is closely observing the incident and actively coordinating with domestic authorities as well as maritime rescue authorities and civil aviation administrations in Malaysia and Vietnam.

Fine weather is forecast for the search area.

Rescue teams from different countries are cooperating to conduct a round-the-clock search.