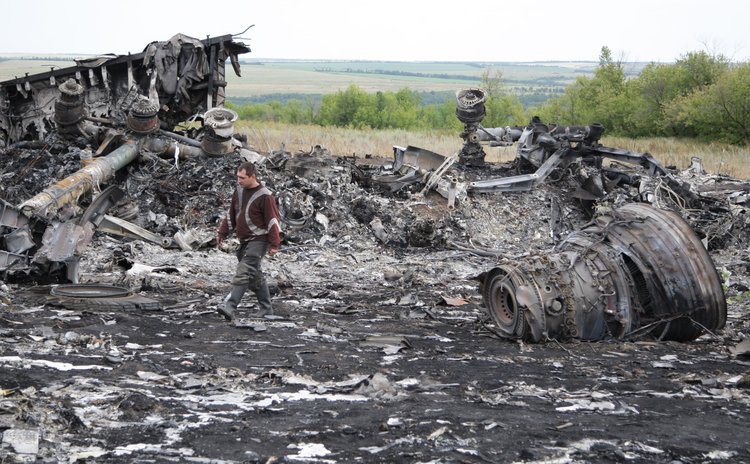 DONETSK, Ukraine, July 20 (Xinhua/Sun) -- "There are plane debris and victims' bodies everywhere; it's too horrifying to be described with any words," said Olexandr, a villager living near the crash site of Malaysia Airlines flight MH17.

The Boeing 777-200, en route from Amsterdam to Kuala Lumpur, crashed Thursday in restive eastern Ukraine, killing all 298 people on board.

Olexandr said he heard three loud explosions that made buildings rattle when the crash happened.

"At first, I thought the explosions were caused by bombings of the warring sides," he said. But after going out of his house, he saw people falling from the sky.

"I was petrified by the terrible scene in front of me. It's a huge disaster," Olexandr said.

Besides victims' bodies, chunks of metal, pieces of luggage and other debris also scattered on the ground between the villages of Grabovo and Rozsypne, about 80 km east of the city Donetsk, which is controlled by insurgents.

After the plane's crash, insurgents set up checkpoints on the main road linking Donetsk with the crash site, located in an area where they are fighting with government forces.

At the crash site in Grabovo, a large number of insurgents were seen standing guard. They set up two roadblocks with military vehicles on the only major road there, and journalists' were allowed to do reporting in a zone between the two roadblocks only.

In the zone, rescue workers sent by insurgent groups in Donetsk said they have found most of the bodies in the fields surrounding the crash site. Some were piled together but others remained where they fell as the places were identified by sticks placed in the ground with white ribbons attached.

An insurgent on guard told Xinhua that they had originally planned to keep the crash site untouched before the arrival of international investigators.

But due to the hot weather in recent days, the victims' bodies had to be collected and put into black body bags in case of decomposition, he said.

According to local residents, the plane's nose fell in a field of sunflowers about 100 meters from the entrance of Rozsypne, where rescue workers have found and carried away over 40 bodies.

Bunches of flowers have been laid around the debris of the ill-fated plane to mourn the dead, among whom many are women and children. The pictures of some of the kids, printed by local residents from the Internet, are surrounded by a lot of toys.

A woman who only gave her first name as Marina said that when the jetliner crashed, one of the corpses fell in the yard of her house.

"I heard a loud crashing sound when watching TV with my husband. After opening the door, I was almost scared to fall in a faint," she said sobbingly.

She said that after a month-long conflict between insurgents and government forces in the region, local residents were hoping that it would end as soon as possible so that they could live a peaceful life as before.

"We're peace-loving people," said Maria, who has not yet recovered from her horrible experience.