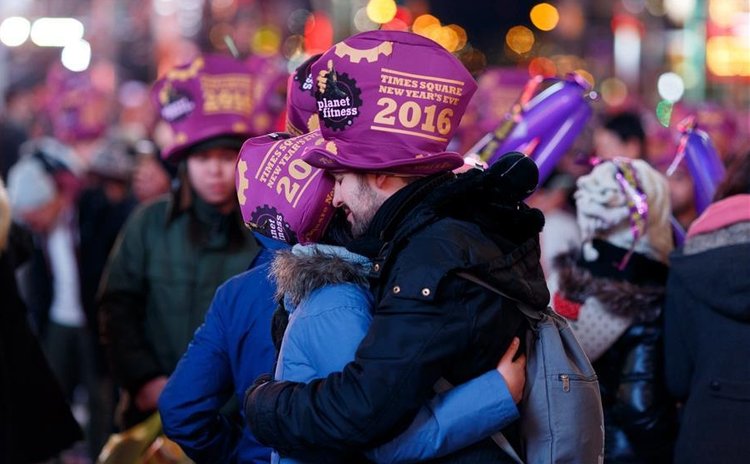 NEW YORK, Dec. 31(Xinhua) -- As the glittering crystal ball dropped with live music and the countdown resonating across Times Square, nearly one million delirious revelers burst into cheers, ringing in the new year amid tight security on Thursday.

With memories of the deadly attacks in Paris and San Bernardino, California still raw, the New York Police Department (NYPD) this year deployed nearly 6,000 policemen to safeguard what it called "the biggest and safest New Year's Eve party".

Multi-layered checkpoints are also set up in and around Times Square, manned by policemen with long guns, radiation detectors and bomb-sniffing dogs.

Meanwhile, a special counter-terrorism unit and plainclothes officers were also scattered among the crowds.

"I feel very safe now," said Zachary Freeman, who came from Arizona. "The NYPD is out there, full in force. Every government agency in New York seems to have a presence here, keeping everybody safe, protecting everybody, and doing an outstanding job. So no concerns, everybody out here is just having a great time."

When asked whether he had any hesitation when deciding whether to attend the countdown, Freeman said that it was a spontaneous decision to attend the event, leaving for New York just two hours after making the call at home. "So no hesitation whatsoever," he said.

Paola Duran, a visitor from Algeria, said: "I think we are very secure in America right now, especially tonight, especially after what happened across the world. I feel very secure."

Thursday night's celebration featured more security than in previous years. The NYPD has imposed tighter restrictions at the entry point, double-screening every spectator as they enter the Square.

As an precaution measure, heavily armed personnel were deployed on metro trains heading for the Times Square.

On Tuesday, to assuage public concerns about the security, NYC Mayor Bill de Blasio said at a news conference in Times Square that the NYPD would be out in force on New Year's Eve.

Meanwhile, the city for the first time used the 500-plus member Critical Response Command, a unit specifically trained to detect and respond to attack plots, the mayor said.

"This is the first time we've had such a full-time dedicated force in such a number in this city, and it is going to make a big difference," he said.

James Waters, who is in charge of counter-terrorism operations for the NYPD, said: "We are very very confident that on New Year's Eve New York City will be the safest place in the world to be."

On Thursday, New York canceled its firework celebration for this year so that more police could be deployed on patrol.

The announcement came after a Rochester man accused of being an Islamic State sympathizer was arrested Wednesday on charges of plotting a New Year's Eve attack.