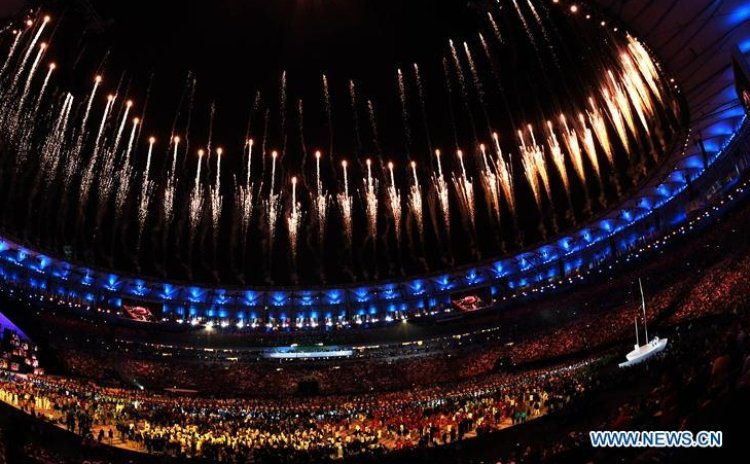 Fireworks is seen during the opening ceremony of the 2016 Rio Olympic Games at Maracana Stadium in Rio de Janeiro, Brazil, Aug. 5, 2016. (Xinhua/Cheng Min)

RIO DE JANEIRO, Aug. 5 (Xinhua) -- It may not have had the power and glamor of Beijing 2008 or the sophisticated elegance of London 2012. But Rio de Janeiro showed that low budget could be high impact as it delivered an Olympic opening ceremony that will long be remembered for its colour, imagination, passion and profound message of hope.

Some 21 million US dollars were spent on the four-hour extravaganza at the Maracana stadium, about half London's outlay four years ago. During the week the show's executive producer, Marco Balich, said the figure was irrelevant, vowing the creativity of his production team would ensure Rio's curtain-raiser was the "coolest" in history. The 54-year-old Italian, participating in his 17th Olympic opening and closing ceremony, was as good as his word.

The ceremony began with a two-minute video showing how sports are an integral part of Rio's lifestyle, where nature and urban life coexist in harmony. The video was accompanied by the song "Aquele Abraco", That Hug, composed bossa nova legend Gilberto Gil. The song, performed here by Luiz Melodia, was seen as a symbol of the struggle against Brazil's military dictatorship.

The focus then turned to the center of the stadium where silver-clad performers reproduced a pattern created by Athos Bulcao, whose work is widely seen to reflect the founding elements of Brazil's culture, with its African and Portuguese roots. Giant waves were created by the movement of some 250 metallic sheets along with the music Samba de Verao, or Summer Samba.

It was followed by a countdown in which the squares were inflated by their own movement. The sheets turned into giant cushions, which percussionists hit to perform a drumming "batucada". In the center of the stage a design of a tree was raised, symbolizing peace with the earth.

The main element used in the segment was the Abrigo, developed by Rio artist Franklin Cassaro. The "peace with the planet" symbol was designed by cartoonist and writer Ziraldo.

Samba composer and lyricist Paulinho Da Viola then performed a delicate and stirring version of the national anthem along with a small string orchestra. Meanwhile a group of Brazilian athletes, old and young, waved the Brazilian flag on a curved stage, inspired by the renowned architect Oscar Niemeyer. Among the experienced athletes involved were Robson Caetano, Fernanda Venturini, Giovane Gavio and Maurren Maggi.

The next section was dedicated to the Amazon region, home to the world's largest rainforest. Producers recreated the "birth of life" with a three-dimensional projection of micro-organisms that moved frenetically and divided among themselves. Microbes, represented by large kinetic sculptures, fluttered across the stage. Then a giant forest filled the center of the stadium.

The audience remained captivated as acrobats simulating the movements of ships in a storm took over the scene. The performers represented three mechanical Caravels arriving in Brazil after crossing unchartered waters. Upon reaching the center of the stage they were surrounded by indigenous tribes, their movement having left a visible trail on the landscape.

Slavery endured for almost four centuries in Brazil and their story was not forgotten here. Wheels and sticks symbolized plows as artists portrayed shackled slaves at work. The projected forest gave way to designs of sugarcane plantations, showing how industrial development has shaped Brazil's terrain.

There was also a nod to the country's arabic and oriental descendants, with groups of dancers performing a choreography that paid tribute to their culture and arduous journeys from afar.

Contemporary Brazil became the central theme when a majestic city skyline emerged, depicting dense Brazilian metropolises such as Sao Paulo, the largest city in South America and the biggest in the southern hemisphere. Three parkour groups jumped acrobatically from the tops of one building to another, showing Brazil's capacity to overcome chasms. Accompanied by a version of Chico Buarque's song "Construction", a cluster of boxes took the form of a giant wall.

The wall disappeared into darkness and the 14-bis aeroplane, invented and first flown by Brazilian aviator Santos Dumont - came into view. An actor portraying Dumont, flew over Rio to the tune of Tom Jobim's Samba de Aviao.

No celebration of Rio culture could be complete without an acknowledgement of bossa nova, the sensual, soothing music that was born in the seaside city in the 1950s and became acclaimed around the world in the 1960s. It was only fitting that bossa nova's most famous hit, the Girl from Ipanema, was performed by Daniel Jobim, the grandson of the song's composer Tom Jobim, whose image was projected on the stage.

Rio de Janeiro is a city of more than 1,000 favelas - communities where much of the country's rhythms and dances originate. Funk artist Ludmilla delighted the audience with her rendition of "Rap da Felicidade", an anthem in Rio's favelas, while a boy danced.

Elza Soares then performed Canto de Ossanha, a song which played a major role in helping Afro-Brazilian music break into the mainstream. The segment was completed by Zeca Pagodinho and Marcelo D2, contemporary Rio artists that have created their own styles by fusing samba, pop, pagode and hip hop.

Credited with empowering black women, Brazilian rappers Karol Conka and MC Sofia sung while a dancer performed a combination of break dance with capoeira. MC Sofia, who is only 12 years old, showed all the makings of a global pop star with her confident and compelling on-stage presence. "Look and listen to this black girl. Focus only on the empowerment, respect our fight and our movement," she sang.

The stage was then swamped by Maracutu and Bate Bola dancers. In a warning about the danger of intolerance, a battle broke out between the two groups that convulsed the stadium. The energy and tension of the artists portrayed disputes throughout Brazil and the world that are yet to be resolved.

Actress Regina Case brought the crowd to its feet by dancing to Pais Tropical while Jorge Ben Jor played the guitar. Their performance was followed by choreographies from a typical Madureira Baile Charme, or soul ball, featuring some 1,500 dancers. The upbeat segment ended with a short fireworks display.

The next part of the ceremony was a reminder of the fraught impact of climate change. Screens with Nasa-type data showed the spread of carbon dioxide in the atmosphere, climbing temperatures, melting ice caps and rising sea levels. Meanwhile a boy tried to find a way out of maze of buildings in a dry, treeless landscape.

The sombre scenes were followed by a message of hope as the boy spotted a plant emerge from the arid ground. Carlos Drummond de Andrade's poem, A Flor e a Nausea, was read by Fernando Montenegro and Judi Dench, its verses providing hope the planet can be saved. "Stop business," the poem said. "A flower has sprouted in the street." Meanwhile screens showed the benefits of planting new trees and told us that Brazil has reduced deforestation in the Amazon by 80% since 2005.

In an Olympics first, athletes participated in the opening ceremony's creative program by receiving a seed and a cartridge with soil. The 11,000 seeds will be planted in Radical Park at Rio's Deodoro Olympic site, forming the Athletes' Forest. There will be 207 species of Brazilian trees with a different one for each Olympic nation.