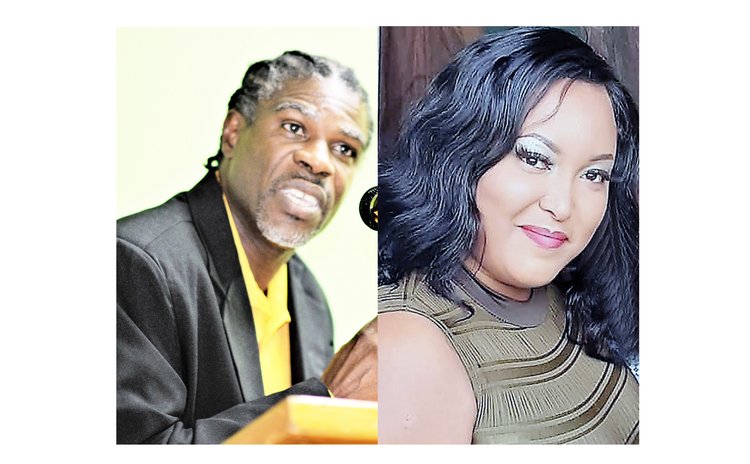 Tues 26 Oct, 2021 - On the morning of Sunday 10 October 2021, five Dominicans perched on various rungs of the prominence ladder, met via Zoom in an emergency meeting in a desperate attempt to find answers to a looming political catastrophe.

Of major concern to the five of the seven founding members of the Alternative People's Party (APP) - Alex Bruno, Luchiano Dupuis, Marlon Giraudel, Gordon Henderson and Kendra Stephen – was how to stop their interim political leader and fellow co-founder, Tahira Blanchard, from going rogue. Blanchard was not invited and the seventh co-founder, Indira St. Jean, was unable to attend because she was in quarantine, one source explained to The Sun.

The team discussed dissolution of the party because of perceived infractions that Blanchard had committed, stated various sources, but in the end decided on a different course of action that failed spectacularly.

In a bid to "to save the vision, reputation and integrity" of the party, a letter signed by Stephen as the conclave chair, was sent to Blanchard stressing their disheartenment over her alleged plans "to make disparaging media releases" that week and to exclude Bruno, the APP's political strategist, from the party.

The interim leader was asked to contact Stephen within 24 hours "and prior to you making any public, private or any other disclosures or taking any action whatsoever on behalf of and as a representative of APP," to arrange a meeting to discuss the issues of concern.

"Failure to comply will result in strict and conclusive disciplinary action," stated the letter.

Blanchard responded mockingly with a laughing emoji via WhatsApp, The Sun was told, and less than two days later the APP was crumbling in a most extraordinary exhibition of bloodletting and defenestration. The suddenness and ruthlessness of its demise brought back memories of the former British prime minister, Harold Macmillan's Night of the Long Knives – except in this case every senior member of the APP was driving a knife into each other's back- and it gave modern day meaning to the Liberal MP Jeremy Thorpe's subsequent quip that "Greater love hath no man than this, that he lay down his friends for his life."

"I don't see how they can rise from the ashes," one experienced political activist and former senior public servant said of the APP.

The violent end to the relationship between Blanchard and Bruno took many by surprise. After all, even as members of the party's hierarchy, including some who now are on her side and those who no longer are, questioned her competence, Blanchard depended on Bruno to publicly defend her and to privately counsel her. In fact, her heavy reliance on Bruno left some of their colleagues uncomfortable.

"Tahira does not have what it takes [to successfully lead the party]," one top official told The Sun weeks before the implosion. "She depends on Alex for everything."

However, in recent weeks few noticed while the discord crept in as rumours began to swirl about Blanchard's connection to the prime minister, which made some of her colleagues uncomfortable and left them questioning her commitment to building a party that can win a general election. She, in turn, began accusing Bruno of being a dictator and stymieing her growth.

However, people familiar with the inner workings of the party told The Sun the relationship between the two deteriorated to the point of no return about a month ago when Bruno recommended the appointment of a new leader - who The Sun understands is a 34-year-old doctor – by the end of this year to lead the party into the next stage of its development and prepare it to compete effectively in the next general election.

"Tahira didn't like that, she was up in arms and claimed that the strategist was suffocating her and keeping away her ideas so the new leader would enjoy the benefits of her hard labour," revealed one person who is close to both Blanchard and Bruno.

About the same time The Sun began publishing a series of articles on some of the APP's failed attempts to recruit prominent Dominicans, as well as confirmation of its symbol. This led to angry exchanges between the strategist and political leader, with each one accusing the other of leaking the information. As the two fought even while putting on a public act of unity, others began to express a lack of faith in Bruno. One top party official went as far as questioning his integrity.

"I can tell you Alex is having integrity issues with the party right now," the official told The Sun. "Big time."

It was a sign that the fratricide was well and truly on and the long knives were being plunged and twisted. At the same time senior party members were sharing voicemails viciously denigrating each other. One of the subjects of the unsavoury messages was Julius Corbett, the party's president, who some simply did not trust.

Repeated calls to Blanchard, as well as a voicemail seeking comment, were ignored and Corbett would not comment. Neither would Bruno who insisted he had said all there was to say on the matter. But a person with close ties to the party told The Sun Corbett's arrival helped hasten the APP's collapse.

"He is the architect of the destruction of the party," argued the person, who spoke on condition of anonymity so as not to appear to be taking sides in this political war. "He destroyed the party."

Still, there are some who believe the APP was not built to last. Among them is Peter Wickham, the Barbadian political scientist who is familiar with politics here. He argued that the absence of anyone in the party with political experience meant it was doomed from the start.

"To me it is silly…and that's no way to distinguish yourself," Wickham told The Sun. "So, it doesn't surprise me at all that this is happening."

Corbett has expressed confidence that the party will rise again, but with just Blanchard, Sharon Vidal, the acting deputy political leader, and him left – the status of Kendra Stephen remains unclear – and with practically no public support, the APP has all but shuffled off its mortal coil, conclude many observers.

As one experienced political operative told The Sun, "They're gonna be reduced to the trash heap of history."