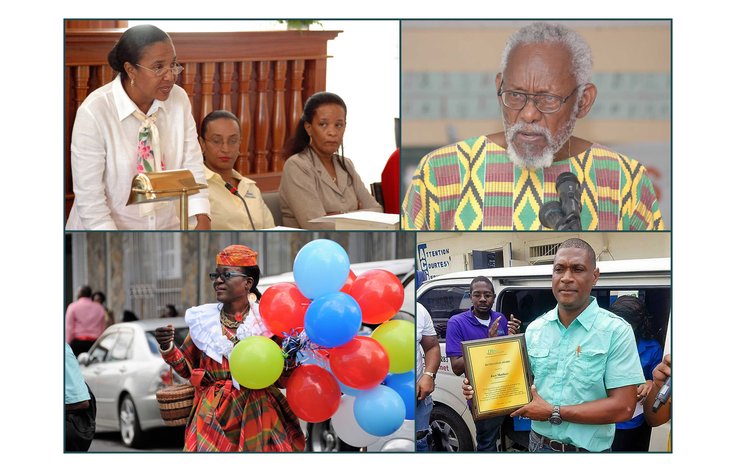 Former government minister F. O. Riviere may have been the most well-known of the three persons who died last week but, nonetheless, the death of Jacinta David, the acting Chief Cultural Officer and Alex Phillip, the retired Clerk of Dominica's Parliament and Kurt Matthew, the DBS radio engineer were indeed shocking.

None more than David who was found non-responsive in her bed at her home on 22nd November, 2017.

"I was surprised, saddened-very deeply saddened- shocked as well because up to yesterday morning she was with us at a staff meeting at the Old Mill Cultural Centre," Raymond Lawrence, the Chief Cultural Officer. "We have lost a devoted staff member and I would say a cultural stalwart."

David had a long career in culture having joined the Waitukubuli Dance Theatre in the late Seventies. She studied dance in Jamaica and later formed her own dance group, the Performing Arts Workshop.

"She introduced the Ti Matador competition which is a popular show for children during the independence season," Lawrence said. "She had a tenacity and determination to achieve the goals that she set out to achieve."

David recently headed a Dominica delegation to CARIFESTA in Barbados.

In addition to David, Dominicans said goodbye to Alex Phillip, the retired Clerk of the Dominica House of Assembly. She died, after a long battle with illness on 21st November 2017.

Alex, the wife of the late Karol Phillip of Campbell's Business Systems and Services, retired from the public service in June 2009.

"Mrs. Phillip was everything that is expected of the Clerk of the House of Assembly. She was knowledgeable, she was helpful, she had a good understanding of the Standing Orders and the way we should administer parliamentary proceedings," said Alex Boyd-Knights, the Speaker of the House of Assembly. "She was to my mind irreplaceable. I have not had the luck to be given a clerk of her standing and her stature."

Speaker Knights described Phillip as one of the most outstanding civil servants.

Then F.O. Riviere, the parliamentary representative for Colihaut who retired from active politics in 2005 died in Martinique on Thursday 23rd November 2017. He was 85.

Riviere, popularly known as FO, served in various positions in the Rosie Douglas, Pierre Charles and Roosevelt Skerrit administrations. He acted for a short period as prime minister after the sudden death of Pierre Charles and because of his experience he expected to be elected prime minister by the elected members of the Dominica Labour Party after Charles died but he was out maneuvered by Skerrit, the least experienced member of the Charles Administration.

Riviere also served in the Foreign Affairs and Trade portfolios.

Most shocking of all was the sudden death of Kurt Matthew, the station engineer of the Dominica Broadcasting Services (DBS radio) who died on Sunday night in a traffic accident in Canefield.

Matthew's death was most surprising because the engineer was being lauded for his feat of getting DBS back on the air quickly after the ravages of Hurricane Maria on 18 September 2017. A police report on the accident has not been issued.