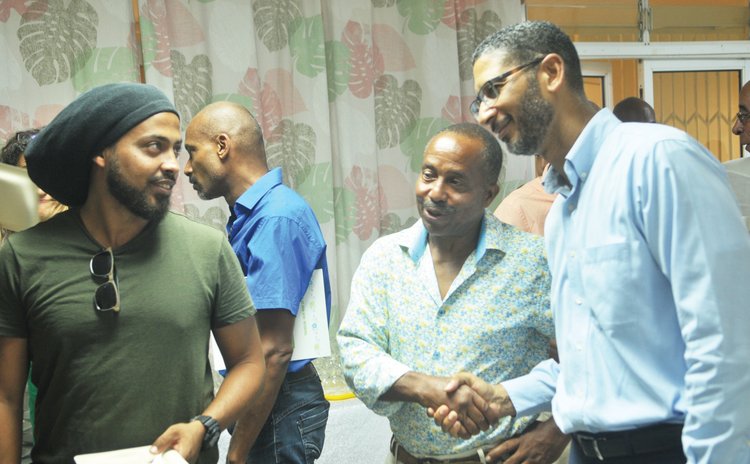 Collin Piper,right, and members of the DHTA at the recent AGM

Tourism minister Robert Tonge told the Dominica Hotel and Tourism Association (DHTA) 50th Annual general meeting that Dominica is making its mark on the global scale as an adventure and heritage tourism destination.

"Our industry which is rebounding from the impact caused as a result of the passage of Hurricane Maria in 2017, is projected to surpass pre-2016 figures by the end of the 2019 season. The combined efforts of the public and private sectors to rebuild the sector is taking on an even greater meaning and is expected to result in increased visitor arrivals and visitor spend over the next few years," Tonge said adding that "the expected growth in the industry in Dominica has been fueled by increased awareness of the island, and an increase in the level of investment in the sector, with expansion in ancillary services including, the upgrade of many tourist sites and attractions as well as an increase in the transportation and other supporting services.

"We expect to see an increase in both the diversity and inventory of rooms to over 900 in the next 12-24 months, with the completion of projects under the CBI programme and other major funded projects". Meanwhile, the DHTA said it was strengthening linkages with various stakeholders to improve the tourism product.

"The DHTA is also pleased to announce that Hikefest, our annual hiking festival and flag ship event during tourism awareness month, will now expand the adventure experience to include hiking year-round," said Kevin Francis, DHTA's executive vice president. "The brand will seek to establish Dominica as the adventure capital of the region thereby claiming the adventure space as our own, and rightly so. We will accomplish this by strengthening local hiking groups such as Dwivayez hiking club and Next Level hikers and work along with local tour operators, transportation providers, the Discover Dominica Authority and members to create attractive packages for person wanting to come enjoy our adventure space".