Rolling with the punches: a key local company aims for a strong revival 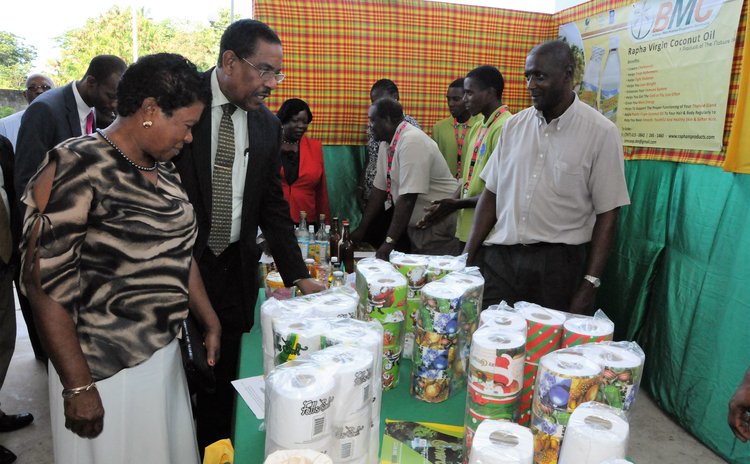 Dominica's first toilet paper company is reinventing itself after seven years of production with a generous helping of challenges.

Nature Island Paper Products Inc. (NIPPI) was officially launched in 2010 to produce affordable high-quality toilet paper and got a warm response from the public.

Toilet paper was the start-up product, but according to Managing Director Severin McKenzie, the company always planned to produce table napkins and paper towels later.

The future seemed bright, but over the years unforeseen challenges emerged and production has declined gradually.

McKenzie stated frankly that he is not satisfied with the company's performance but remains convinced that it is a worthwhile project and is determined to press on.

A critical challenge is convincing consumers that the locally produced toilet paper is at least as good as similar products imported from overseas.

"We have had a hard time convincing a number of consumers that the imported products are not better," he said, partially because of competitors' flashy packaging and also because of the tendency to think that imported goods are better.

"Their packaging may be more attractive because they are exposed to more facilties than us. . . we have to import our packaging material, " McKenzie noted.

McKenzie pointed out that most consumers do not realise that the raw material for most foreign brands of toilet paper comes from the same source as the local product.

Pulp from Indonesian timber harvests is exported to Trinidad, converted to jumbo rolls of paper and then distributed to producers like his NIPPI for final conversion.

"So a lot of the tissue paper that is on the market is basically coming from the same source. . . " Mckenzie asserted. Mckenzie said a survey about three years ago showed 35 different brands of toilet tissue on the local market, mainly differentiated by ply-thickness of the paper and packaging.

From a developmental perspective, McKenzie argues that by producing locally, his company reduces the flow of foreign exchange from Dominica.

"When we bring in the raw materials and do the conversion down here, we are in fact . . . reducing the flight of foreign exchange. . .

"The cost of the raw material in terms of importation is significantly less than the cost of importing the finished products like the competition do. . .

"If the competition brings in a roll at 80 cents a roll. . . we bring in the same toilet tissue at 30 cents . . . it means we are saving the economy 50 cents in foreign exchange," he said.

Another factor adversely affecting his company's performance was its inability to expand its range of products as planned.

The tissue paper business is really a three-part package of toilet paper, napkins and paper towels; marketing potential is better if a company produces these simultaneously, he said

"This is because the importers who import the tissue products usually import t at a ratio of 75:15:10 (toilet paper, paper towels and napkins, respectively).

"Being able to only offer the toilet tissue limited our ability to convince them to purchase . . . we could not supply all the products that would make up a container when they import.

"This has been a real challenge for us over the last few years and we are just hoping that we would be able to get to the expansion and take advantage of the market," he said.

McKenzie pointed out that the local market for toilet paper is worth approximately $7M per annum, and with napkins and paper towels added, it would be worth about $10M.

In hindsight, he said NIPPI should have produced all three products from the outset.

Not doing so made the local company one-dimensional and reduced its competitive capacity. "You are dealing with one product, you are bringing it at a price ...

"You are going to produce it at a different price. . . then you have importers who are bringing in the same product . .

"So if they decided to give me competition and lower their price [for toilet paper], they could just up their price on other things," McKenzie said.

He recalled the case of a local merchant who requested NIPPI's price list. The merchant then used that list to leverage a lower price from another supplier.

"Then they called me and said: 'Our suppliers are giving us this price, can you beat that?'" he said.

As its challenges mounted, its staff strength of 60 declined to just six.

Nevertheless, the company is not closing its doors and the business is being re-structured under a new company comprising private investors.

McKenzie said the re-organisation of the business depends heavily on the company expanding its range of products to include napkins and paper towels and more.

The company is hoping to finance this expansion by accessing some of the funds earmarked by the Government for the manufacturing sector.

"We are hoping to take advantage . . . hoping that the conditions are not prohibitive," he said, referring to low access to a similar loan.