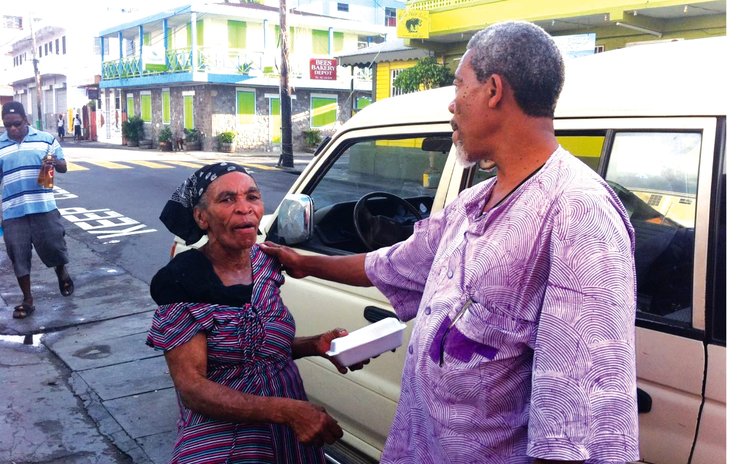 Norris Prevost and one of the beneficiaries of the programme

Destitute men and women around Roseau often know where their Sunday lunch will come from.

All they have to do is turn up at the Prevost Cinemall in Roseau where they will be served tasty meals by Norris Prevost, his wife Joan, the Roseau Improvement Committee (RIC) and others.

Every Sunday, for over 15 years, 70 or more persons in need of a hot meal in Roseau have been benefitting from the generosity of the Prevost family.

It therefore seems fitting in this special season to highlight the Prevost family and the RIC since their weekly feeding of the poor encapsulates the spirit of giving, an essential part of Christmas.

Norris Prevost, one of the two founders of the RIC, said the feeding programme is done under the auspices of this organisation.

The charitable event is largely financed by the Prevost family with contributions from other private benefactors and additional funds from the proceeds of the RIC's annual New Year brunch.

The corporate community contributes to the annual brunch, which Prevost said will be held on January 2nd next year.

The food is prepared in the kitchen of the Prevost Cinemall, and Prevost and his wife do most of the preparations themselves, with some help from other RIC members.

A female volunteer regularly assists with the cooking and Ahmed Alexander often helps with the distribution.

Explaining how the initiative started, Prevost said the idea actually came from his wife.

"Normally on a Sunday we would have some leftover food…one Sunday my wife and I said, 'Why don't we pack this leftover food and give it to anybody we meet along the way? …

"We did that and got about five meals. We saw some guys sitting under some trees on the Goodwill Road and gave it to them. My wife said, 'Norris you don't see how grateful they were…we should do this regularly!' "

He said she volunteered to participate in the initiative as her Christian contribution to her community.

"We do it from our heart and because we realise the people who are benefitting appreciate it," he said.

He added that the Prevost Cinemall has a strong business presence in Roseau and therefore has a corporate duty to give back to the society that has given it much support over the years.

Describing the lunch, Prevost said, "Our Sunday meal is a delicious meal…our base meat is chicken, our base starch is rice, and there would be peas…

The beneficiaries are sometimes pleasantly surprised by the little additions to the basic meal in their food boxes, thanks to supporters of the programme.

This year, since Christmas Day will be on a Sunday, Prevost plans to provide a special meal and he welcomes anyone who would like to contribute in any way.

He thanked members of the RIC who have supported the programme, whether by assisting with the preparation, distribution or in any other way.

He added that he would welcome volunteers to help with the programme.

"There is a lot of work to be done to meet the needs of the needy in Roseau," Prevost said, adding that there is scope for more support in terms of material resources, cash and volunteers.

Another initiative the RIC has undertaken to promote the spirit of Christmas is an annual caroling event.

This year is no different, Prevost said, explaining that groups of children and adults gather in front of the mall to sing carols, much to the delight of passersby.

He said that the initiative has benefitted from the support of the operators of the 'Chu-Chu train', from which caroling is done throughout Roseau.

Previously, the caroling was done with a steelband accompaniment; however, the band has been dormant for a few years.

Prevost said he still has the band's instruments and he will be working towards its revival at the earliest possible time, as soon as he can find trainers and tuners.

With this in mind, he is encouraging those interested in playing pan to call him at 275-3420, email him at norris.prevost@gmail or drop in at the Mall.

Meanwhile, the RIC continues to do its bit towards the development of sports and for the improvements of the lives of mothers, the elderly, children and youths.