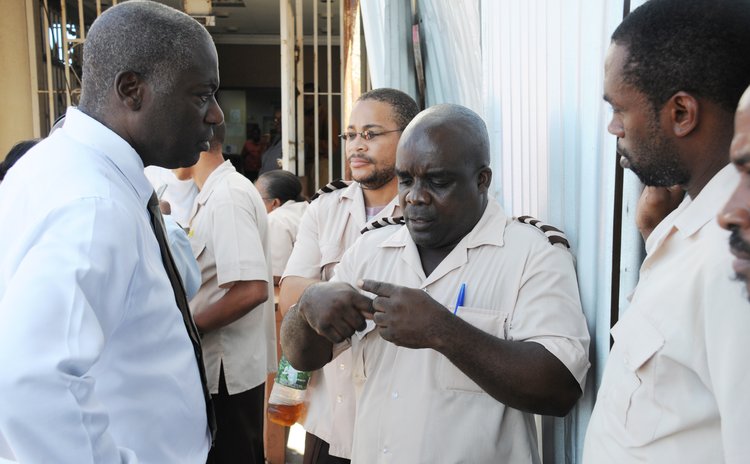 This morning about a dozen workers of Post Office headquarters on the Dame Eugenia Boulevard put away their stamps and letters and boxes and stood on the streets in protest. They said they have spoken too many words and written too many memos to their supervisors without effect.

"We decide we have to do something, somebody has to listen to us," said a postman who declined to give his name ("I'm a postman; I'm a Dominican; I was born here, and I going nowhere," he responded when a reporter asked for his name).

The issue, apparently, is about the health and safety of the workers who have endured the rehabilitation of the Post Office building for more than three years. As the Sun reported in its July 2016 issue in an article entitled "General Post Office Rehab Stops" work suddenly stopped on the million dollar project and the Ministry of Public Works did not know why.

"That project began in July of 2013 and should have been completed in December 2015. But work has stopped and the Government of Dominica is looking for answers," the paper reported.

Now the workers say air condition units have been non-operational for three years and ceiling tiles, made of cancer-causing asbestos are broken and wet. And then there is the persistent dust from the abandoned construction site.

"We have become filters in the post-office," said Ono Vidal, a post office employee. "We are people in there, we are human beings and somebody has to come and see the situation."

And the fear of the asbestos and its impact on their health was their major concern.

"Some of the workers are already complaining about their throats which we assume is the asbestos doing that," said the postman who did not give his name.

"Right now if I talk too loud, I croaking," said Vidal. "Right now my chest burning".

Meanwhile, Dr. Sam Christian of Urgent Care Medical Centre, who was on the site of the protest at the Post Office said he was concerned about the health and safety of the workers there.

"I have invited every one of them who need an independent medical examination to come to my office," he said. "(This is an invitation to everyone) who may have been affected by the dust and the mould and possible asbestos. Can you believe that-asbestos affecting workers on Government duty?"

Dr. Christian said he was proud that the workers were finally standing up after years of requesting and complaining.

"People of Dominica need to stand up with them," he said.

By the end of the work day Gloria Joseph, the Chief Personnel Officer, told State-owned DBS that Government will be giving attention to the workers concern as soon as possible.