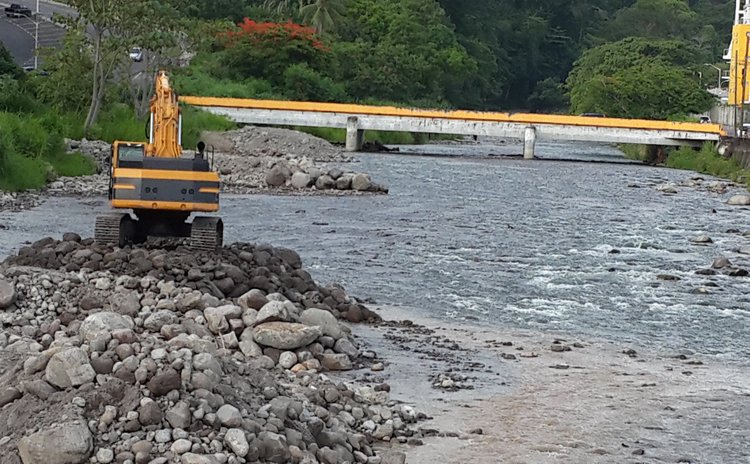 This week work continues on the Roseau West Bridge as if there is no controversy hanging in the air. And at the usual pace of the courts in Dominica it is very likely that vehicles and pedestrians will be using the bridge before the court hears the case. The project is scheduled to be completed by September 2017.

Recall that the method of granting the contract for the West Bridge Project and associated works in Roseau is now before the court for judicial review.

Anthony Le Blanc, the Chairman of the Joint Consultative Committee on the Construction Sector (JCCCS) was in court before Justice Bernie Stephenson when the matter was dealt with on Wednesday July 6, 2016 in the Judge's Chambers.

The hearing has now been fixed for "a date in September 2016" as arranged by the court.

The judge also ordered that the government lawyers file their notices and grounds of objections in response on or before July 22nd, 2016. The JCCCS then has until August 5, 2016 to file affidavits in reply. The parties also have to exchange skeletal submissions and authorities on or before September 2, 2016.

The JCCCS and the government have been at loggerheads after the organization raised concerns over the manner in which the project was allocated to a Barbados-based company; the JCCCS believes that the contract was not tendered in line with the Public Procurement and Contract Administration Act.

On the other hand, the government is claiming the contract was legal, based on a Memorandum of Understanding (MOU) for works for the development of Roseau, including the reconstruction of the West Bridge, existed before the Act came into force in 2015 and that the project was an emergency after Tropical Storm Erika.

In its statement of claim, the JCCS says it was concerned that the entire procurement proceeding leading to the signing of the Contract was done in secret, contrary to the minister's suggestion that it was a transparent process insofar as pricing was concerned.

"To date, neither the minister nor the Ministry of Public Works and Ports has disclosed any of the documents relating to the evaluation of NSG's bid (assuming that there was such a bid) and the award of the Contract," the claim said.