Roseline Guiste of Pottersville: "River in the house and the raging sea blasting" 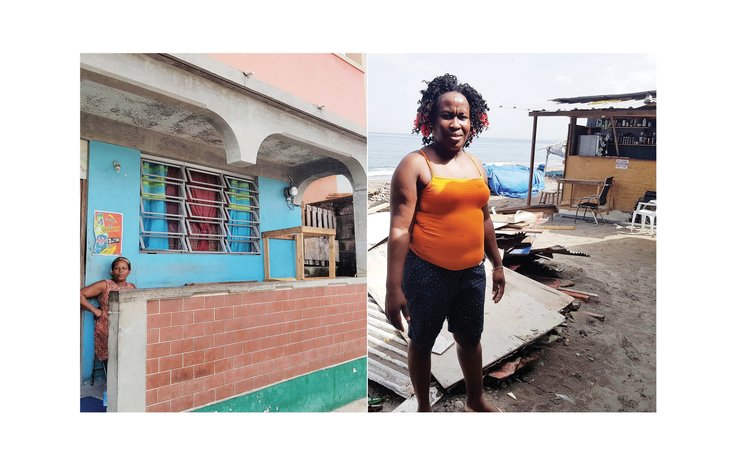 Residents of Pottersville endured a double during Hurricane Maria on 18 September 2018; water from the Roseau River entered their houses from the left and ten-foot waves from the raging sea slammed them from the right.

Roseline Guiste who lives on the highway near the roundabout said her Maria experience was terrible. On that day Guiste was at home awaiting the arrival of the hurricane. Nonetheless, she was nonchalant about the storm because she thought it was just "another hurricane."

"It was raining heavily on September 18, 2017. A group of about 15 or 16 of us were on the porch and so we decided to cook a food. The rain grew heavier and we decided that the porch was not safe so we went inside the house and then shared the food. We also called a few of the neighbours to join us. I also called for my granddaughter who also was living nearby.

"In the house had about 15 to 16 of us during the passage of Hurricane Maria…and while in the house, I told them that I was taking the smell of mud. We had with us in the house a fisherman by the name of Norman Bully and he asked us to bring rags quickly but by the time he said that I ran to his aid with a mop but the river had already made its way inside the house and flooded us.

"We were helpless. The water was climbing rapidly and we had to seek rescue from the downstairs. Fridge floating, window burst, television and all in water and a Rasta nicknamed Glo had to physically lift me up and put me on the counter for rescue because I saw death in my eyes".

Guiste said a baby was on the bed and she had to try to rescue the child or it would have died.

"It was just terrible, people crying, it was dark, and we were helpless. Some started to pray and Tony Kelshire tried to force open the back door of the upstairs for us because we would all perish where we were. In doing so he was injured by a broken board with a nail.

"Trust me, it wasn't easy for us, river in the house and the raging sea blasting. It was just rough. We still have people in the house as a shelter.

"We are just one family right now. That night we did not sleep praying for daybreak and a certain time I said, 'Bondie, day not breaking'. Hurricane was singing, talking, whistling…first time in my life I experienced that. The hurricane was terrible and I don't want to experience that again."

Viella Jno Baptiste, another Pottersville resident, operates a bar near the seashore. She was in the bar with six others when Maria struck.

"We had to seek shelter in the nearby public convenience thinking it was safe but while we were there the roof went and water started to come in rapid. So we had to brave the conditions and go elsewhere for rescue."

Jno Baptiste said there were seven people in the public convenience including a pregnant woman.

"We were in the centre of it all-the river and the sea. It was rough. Maria taught us about life and I wish all of us would change our lives after the experience.

"I lost everything, all what I had worked years to achieve, clothes, pots, pans, my phone…here I am now back in business in the same spot with my bar fighting for survival.

"Thanks God I have life. I carried materials and built back. During the hurricane I thought the world was ending. First time I hear a hurricane speak and cry. If we have to go through that again we shall perish; it was not a nice experience but you must trust in the Lord. Man can't save you, only God can.

"I just wish we could get some help from the Government. I have my kids and I am their mother and father".