Roseline Thomas-Dangleben: If I am alive and I can assist, I will 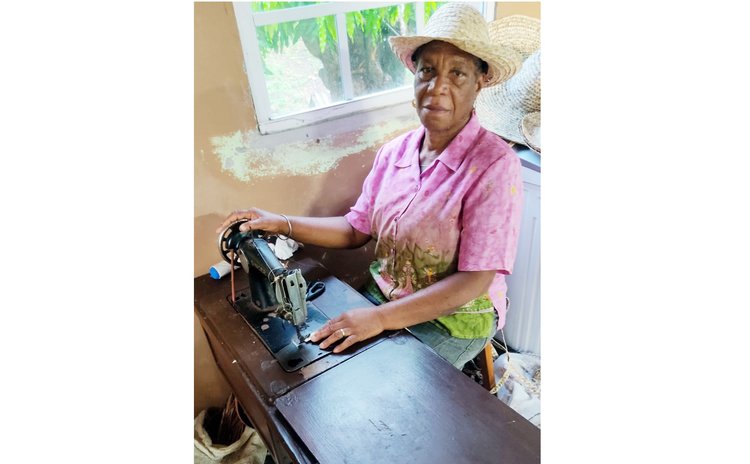 The last active straw-hat maker in Grand Bay wants to see more people take up this artform to keep the culture alive.

67-year-old Roseline Thomas-Dangleben has been making straw hats for a living since she was a teenager. She tells The Sun, that she has been fine-tuning this skill her entire life.

Her voice perked up as she described the process of making her signature hats.

"First, you get the screw pine, then cut it," she explained. "You then get wood to boil it. After that, spread it in the sun for a few days to bleach white. Then you clean it because it may have thorns in the middle and on the sides."

In order to get various styles and different colours, another material is used in the process.

"You cut the screw pine by strings, then you get the coconut leaf and blend it in to make different designs," Thomas-Dangleben said.

A final step in hat-making is sewing the pieces together. For that, she uses her manual sewing machine to put the finishing touch on her creations.

"It is on it I send my children to school. I have seven children; they all went to secondary school. I pay my bills, and do whatever I could do. Up to this present time I still carry on with it," she said.

Thomas-Dangleben laments the challenges which face the straw hat-making industry in Grand Bay.

"Most of the elderly who were doing it cannot do it anymore because screw pine is something that grows in the bush, sometimes in the mountain, you might have to go by the seaside according to where it grows," Thomas-Dangleben said.

Coupled with the difficulty in sourcing the material, is the age factor which has rendered many people unable to make this product. Another challenge Roseline faces is the irregular and infrequent sale of her signature item.

The veteran craftswoman reminisced about the popularity of screw pine and vetiver products in earlier years.

"In times of the 60's, 70's, and 80's more people were making hats and mats, and there was Tropicrafts. They used to buy from us, more people would plant, so some would sell there or to people in the village," she said.

The straw hats and vetiver mats were also very popular in the French islands.

"Growing up, I used to see hucksters, now I don't see them as much. The hucksters would buy from my mother – and people in the village - and carry it to the French countries to sell," she said.

Roseline, passionate about creating her straw hats, is willing and ready to teach anyone who wants to fashion these items.

"I don't go to the garden as before because of my legs, so I normally stay home and sew. If somebody comes to learn obviously, I'll make the time to see what we can do," she said.

In addition to her volunteering to teach, Roseline believes steps should be taken to rejuvenate the art form.

"We should keep it because it is something rare, unique, and it is our culture we can pass on to the youth," she said. "We could try to do something similar to Tropicrafts and get young people involved, get a market for the products. If they want to do something and I am still alive and able I will assist the best I can."

Roseline has passed her knowledge down to two of her children who know how to make straw hats but are not as deeply engaged as she is.