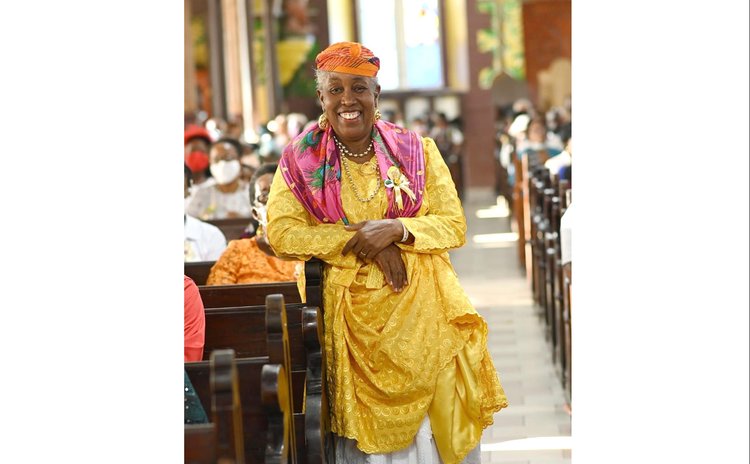 Dominica's culture is thriving among the youth as a retired civil servant with a passion for the culture has taken it upon herself to pass on the country's traditions.

Rosette Bertrand of Dublanc is synonymous with the Flamboyant Dancers, of the same community, which she founded over 15 years ago. She tells The Sun her love for culture developed at a much later age because initially, she was not interested.

"When I was young, I hated that. My grandmother loved dressing in national wear and going to cultural dances. Whenever she and my grandfather went I had to go, and I was the only child there. Our Parish is St Peter and people would get excited and dress in their national wear for the feast," she said. "My grandmother was the ringleader and would dress me up and I hated that."

That was then, fast forward a few years and Rosette truly came to be enamoured with her culture.

"When I became an adult, I started saying 'that is so pretty, 'the young children look so nice'. Independence became my most cherished time of year. I started judging cultural shows and I would dress in something Creole at any time of the year," she said.

The love for and responsibility to youth was always there and it was a no-brainer to share her knowledge.

"If my granny did not introduce me to the culture at an early age probably as an adult I would have no regard for it," Bertrand said. "But now, I have grown up I am saying let me help young ones show an appreciation for it. If they don't appreciate it now, they may show love for it later."

Rosette began her work with the youth over 20 years ago starting with small groups in church, helping them show appreciation for the national wear, especially during the creole season and the feast day.

Finally, in the early 2000s, Flamboyant Dancers was born and became a fixture in the community.

"In April 2005 I officially introduced them – children from Dublanc and Bioche - to the real culture, not only dress but dance and other things," she said.

Wanting to instil a fundamental love for culture in youth, member recruitment starts with children as young as five. Over its 17-year history, Flamboyant Dancers has built up intermediate and senior sections.

"I formed the group with a mindset of teaching the culture; where the dances came from; what it means; the national wear; how it came about. As soon as they enter primary school, Grade K, we start working with them," she said.

A cultural powerhouse, Rosette says there are downsides to having youth as the core of the dance troupe but finds ways to work around it. "Dublanc is a sporting community and it's a small community. Sometimes those in the dance group also play sports and times may clash but we try to make it work. Also, young people migrate for school or work," she said. "Even in Dominica the time and location of where they work may be a challenge."

Training and retaining musicians is also another difficulty the group faces as the dancers are accompanied by musicians from other communities.

Despite these challenges, Flamboyant Dancers is formidable with its regular recruitment programme and Rosette is more than happy to hand over leadership roles to members.

"Continuity and leadership are not a problem," Bertrand said. "Right now, I do very little work. I put a leader for every section and they have a dance instructor. Once you are a Flamboyant Dancer you always are. Those who have migrated join us if we have a performance when they visit. We even have a section called 'Children of Flamboyant Dancers'."

Rosette Bertrand is pleased with the sustenance of culture in her community and is forever grateful to the community, Cultural Division, and authorities who continue to support the promotion of culture in Dublanc and Bioche.