Ross University and Its Economic Impact on Dominica 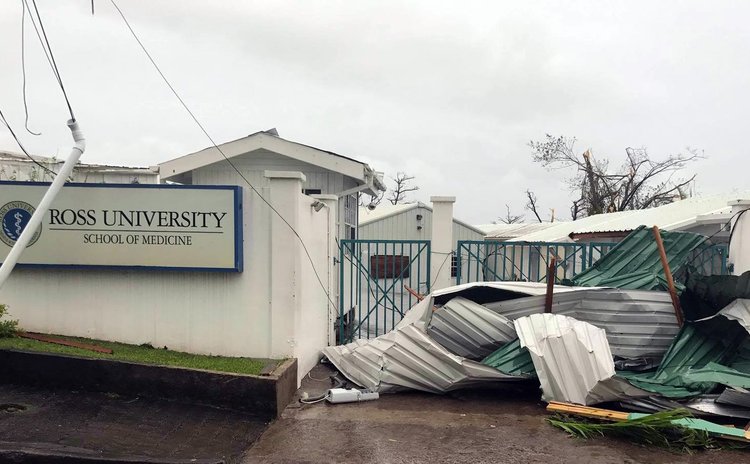 On the heels of Ross University School of Medicine 40th anniversary, it may be fitting and instructive to take a look at its history and its economic impact on Dominica. Moreover, when a company's annual contribution surpasses 15 percent of a nation's GDP, in which it functions, that company's operation, culture, and people must be observed most carefully; its prospects, its growth, and continuous progress should merit uncommon attention. In the following text, the author will give a brief history of Ross in Dominica and will attempt to show its financial contribution (quoted in US dollars) to Dominica's economy. Included are recommendations to the Government and People of Dominica.

In 1978, just a few months before the ravages of Hurricane David on Dominica, Dr. Robert Ross established the University of Dominica School of Medicine with the enrollment of 11 students. In 1983, encouraged by a vision of success and moved by expectations of a more favorable future, he officially named it the Ross University School of Medicine (Ross University). Concurrently, he established the Ross University School of Veterinary Medicine in St. Kitts (RUSVM) and placed both institutions under the control of Dominica Management, Inc., a company exclusively owned by Dr. Ross.

As a consequence of financial challenges and the pressing need to recapitalize the business, Dr. Ross sold 90% of Dominica Management, Inc. to Leeds Equity Partners and JW Childs Equity Partners for an attractive $100 million in February 2000.

Three years later, Dominica Management, Inc. was sold to DeVry for $329.3 million, out of which Dr. Ross got $48 million for his remaining ten percent ownership, a sum evidently greater than ten percent of the sale price, presumably because of the appraised value of intangible assets related to the "Ross University" name. The table below shows the details of the sale:

DeVry was the holding company for DeVry University, Ross University, RUSVM located in S. Kitts, American University of the Caribbean (AUC) located in St. Marten, Adtalem Brazil, EduPristine in India, Chamberlain and Carrington in the United States, Becker CPA program, ACAMS, and miscellaneous equity positions in other education-based institutions. In 2017, the company changed its name to Adtalem (ATGE) and divested its entire stake in DeVry University. Therefore, the holding company of Ross University is Adtalem, a publicly traded U.S. company, listed on the Nasdaq Stock Exchange, with $2.9 billion in market capitalization and sixty million shares outstanding.

The Effects of Ross University on Dominica's Economy

Ross University campus comprises of approximately 273,000 square feet of property located on 33 acres of land, of which roughly 22 acres are under lease, and 11 acres are owned by the institution. Before Hurricane Maria, Ross University had approximately 1,215 students and about 450 (315 Dominicans) faculty and staff in Dominica.

Ross medical students go through a ten semester (approximately 40 months) course before qualifying for residency. Students spend the first 16 to 20 months (four semesters) in Dominica, where they pursue basic science and preclinical curriculum. The remaining 24 months are spent doing clinical rotations, conducted at roughly 40 affiliated U.S. hospitals. The University has graduated over 14,000 students since its inception in 1978.

Like any other medical school, the cost of attending Ross University is hefty. A quick glance at the Adtalem 2017 annual report shows that students pay something in the region of $23,000 per semester for tuition and fees, a 240% increase from 2003 figures of $9,600, an appreciable 6.00% compound annual growth rate.

Gauging from the rental prices of houses and apartments in the vicinity of Portsmouth, particularly those advertised to students, one can estimate within a reasonable limit of certainty that Ross University students pay an average of $600 per month in rental expenses. Taking mid-range prices of living expenses reported by Island Med Student, on a blog article published 11 years ago by a former med student, and adjusted for a 2% annual inflation, one can conclude that the average monthly living expenses of a Ross University student can be broken down as follows:

From these figures, we calculate the university's annual economic impact on Dominica. The table below summarizes annual revenue generation:

One may argue that tuition and fees have no impact on Dominica's economy since it is money collected directly from the students by the company, and, therefore, have no circulatory effects in the country. Permit me to explain why it merits a place on this table. Approximately 30 percent of tuition income is expended on the salaries of 450 employees who live in Dominica, and who incur living expenses within. In addition, another 40 percent is earmarked for administrative expenses, and upkeep of general operations. The remaining 30 percent are either deposited in Dominica's banks or banks within the region, as alluded to in the company's annual report.

Admittedly, there are a few notables that were not integrated into the calculation: the cost of maintenance of facilities and equipment, the consumption of electricity and water, independent contractors, land lease, airport fees, banking fees, and various incidental expenses incurred in Dominica. I did not take into consideration the circulation of new currency in the economy or the effects of new construction in the Portsmouth area.

The correlation between Ross University's contribution and Dominica's GDP was indicated at the onset of this article. Now, considering the above calculation and holding as a denominator $580 million (Dominica's GDP last reported by the World Bank a year or so ago) we can safely conclude that Ross University accounts for 19% of Dominica's GDP, 19 cents of every dollar generated.

The Effects of Hurricane Maria on Ross University

On September 18, 2017, Hurricane Maria, a category five whirlwind, blasted Dominica and caused unprecedented destruction. The hurricane severely incapacitated Dominica's infrastructure creating a difficult, if not impossible environment for students. The campus facilities incurred significant physical damage. As a result, all the students and staff were evacuated out of the island. As a consequence, all non-US and Canadian students (4% of student population) were sent to a makeshift school in St. Kitts, and its US and Canadian students were assigned to facilities at Lincoln Memorial University in Knoxville, Tennessee pending the completion of repairs and remediation to the Dominica campus.

Logically, one can conclude that the temporary closing of Ross University has led to a loss of $9M in monthly revenue for Dominica and a loss of even more significant numbers in indirect business activity. $9M represents a monthly slice of $150 for every man, woman, and child in a country grappling with debt and destruction. These numbers are based on the conceivable mass migration that transpired following Marie and the author estimates the present population at 60,000.

Adtalem's quarterly report, dated March 31, 2018, disclosed: "As of March 31, 2018, Ross University recorded expenses of $39.3 million associated with the evacuation process, temporary housing, and transportation of students, faculty, and staff, and additional costs of teaching on the ship in St. Kitts. Based upon preliminary damage assessments of the Ross University facilities, impairment write-downs of building, building improvements, furniture, and equipment of $14.5 million were recorded as of March 31, 2018. Management estimates that total costs to repair and replace damaged facilities and equipment will be in the range of $30 to $40 million." As of the date of the report, the company had received insurance proceeds of $36.6 million, sufficient to cover the cost of assessed damages.

Recommendations to the Government and People of Dominica

Adtalem has received a sweetheart deal from Dominica's Government, an agreement stipulating complete tax exemption indefinitely. RUSVM in St. Kitts and AUC in St. Marten signed similar contracts. Because the company is a persistent beneficiary of zero tax liability, it pays only a 15 percent tax rate when filing its US corporate taxes, compared with its counterparts who pay out 35% of revenue to taxes. This low tax rate has been a boost to the company's button line, affording it a comparative advantage over its competitors who operate only in the United States. But something interesting occurred recently - something that threatens the attractiveness of this tax incentive: the Tax Cuts and Jobs Act signed by President Donald Trump in November 2017.

The statute lowers the US corporate income tax rate from 35 to 21 percent, a few percentages shy from 15 percent. If Dominica finds itself in the path of a series of destructive hurricanes that would cause additional harm to the company's business, and, if state and local tax incentives from Tennessee and other competing locations are offered likewise, the continuation of Ross University will hang in the balance. Dominica cannot continue to rest on its laurels. The government of Dominica has no bargaining chip to keep Ross University. Taxes? Corporate taxes are falling around the globe. Sun, sea, and sand? You can get that in many countries. In business, there are no permanent friends, just strategic partners.

So, allow me to paint a picture which the reader may appreciate. When a profitable company has such an extensive footprint in a country, when its effects within are so material, and when its existence and expansion so evidently beneficial, it becomes highly incumbent on government and entities of financial means to seek a partial ownership interest in that company.

In 2003, the stock price of Adtalem, then Devry University, was $12.10 per share with 70 million shares outstanding. It is a common practice on Wall-street that when an investor purchases 5 percent or more of outstanding shares, it qualifies the investor to appoint someone to the board of directors, a privileged position with compensation, access to information and the authority of making company decisions. What if, at that junction in 2003, the government of Dominica, St. Marten and St. Kitts had created an equity holding company to invest primarily in Devry. For the sake of argument, we will refer to it as DSS Equity Partners (DSS). Let's suppose, in 2003, DSS had purchased 3.5 million shares for a cumulative price of $42.35 million ($14.12 million from each country). That is a colossal sum, but a prudent investment predicated on securing a nation's interest. Through stock price appreciation (307% as of this writing) DSS investment value would have ballooned to $175 million; it would have received an additional $8.2 million in dividend disbursements. So, one may ask, "where would the government get this sum of money to invest?" May I remind you that Dominica lost $28 million in the Clico insurance fiasco and the country did not hiccup. Or should I ask to canvass the several white elephants that grace Dominica's landscape? 140 black books, adorned with our country's flag, at $100,000 a pop, and there you have it.

Although the return on invested capital would be quite impressive, a more significant benefit would be DSS armed with authority to nominate an individual for a position on the Board of Directors of Adtalem; a person charged with the duties of looking out for the best interest of DSS, and by extension Dominica, St. Marten, and St. Kitts. The incredible inside information accessed would be used to explore additional synergies and to formulate plans and proposals to invite other educational institutions to set up shop in the region.

The reader has been made acquainted with the 14,000 students that graduated from Ross University. I beg the reader to now look at these graduates from a different vantage point: medical doctors who are alumni of Dominica. May I humbly suggest that the government of Dominica creates a program to gift to them two weeks of a free hotel room stay every year indefinitely. It would be a gesture of saying thank you for choosing Ross University; it would be a thoughtful incentive to have them and their respective families to return to Dominica. Obviously, it would be a cost to the government of Dominica, but happily, it would not be a cost to Dominica. It would be transference of currency from the government to the private sector. Since hotel occupancy rate in Dominica is about 30 percent, then the government should bargain for a discount price on a wholesale basis for a portion of unused capacity. These good doctors on their arrival in Dominica must eat; they will party; they will explore; they will spend. Interestingly, some may desire to carve out a portion of their vacation time towards medical work - thus a foray into medical tourism.