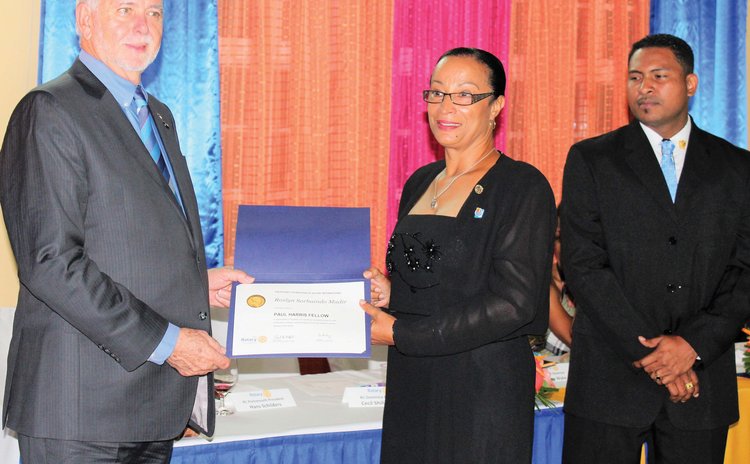 Rassin and his wife were hosted to a cocktail reception at the St. Alphonsus Parish Hall on August 7, 2018 as part of a two-day visit to the island during which they paid a courtesy call on Prime Minister Roosevelt Skerrit and President of Dominica, His Excellency Charles Savarin.

"For the Caribbean region, President Barry Rassin is the first member from our region to have obtained the highest office of president of Rotary International. He has made us extremely proud. In 44 years of Rotary in Dominica we have never before been afford the opportunity which has been offered to us by President Barry and First Lady Esther," Wyke said.

Speaking to Rotarians, President Rassin who was born in Nassau, Bahamas said that coming from a small country he was extremely proud of the work done in Dominica which was "more difficult, challenging and more productive than what was happening in the bigger countries. For me, because of this I had to be here with you to say thank you.

Rotary, he added, is a partnership.

"Make Rotary a priority in our life. This should be the year of change, we change to make it better and commit ourselves to the less fortunate in our community and worldwide," he said.

Rotary he said, "Is the force of nature that makes changes. The work of Rotary is done by you…hold it and make a positive change."

During the function, four new members were pinned, officially making them members of the Rotary Club.

During Rassin's two-day visit that started from 8am on August 7th when he arrived at the Douglas Charles Airport, he was expected to visit the Rotary Club of Portsmouth fish pot project at Cotton Hill; a plastic recycling project in Picard; a house roof project in Bioche and a planned school-walk for the Massacre school.