Roy Sanford: "We were stuck at the Retreat House, seven of us, for 32 days" 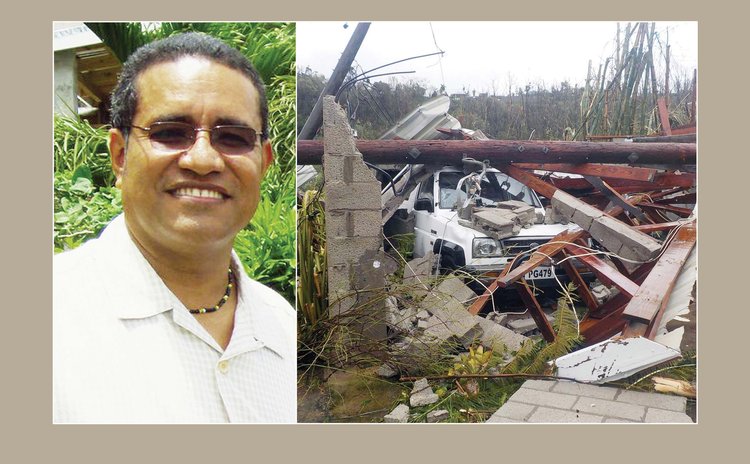 Roy Sanford, a prominent Dominican journalist and his family were marooned at the Holy Redeemer Retreat House at Eggleston for a month after Hurricane Maria devastated Dominica on September 18, 2017.

There they learnt survival skills and bonded with four others, including a priest, until help came from the sky in the form of Dutch helicopters.

"We decided to seek shelter at the Holy Redeemer Retreat House because our house in Loubiere where we resided was not the best so we thought it was the best thing to go there and weather the storm and then we would return home after spending a couple days there with the priest and brothers.

"The second part of the storm was terrible, the windows were shaking and we feared the worst. So we went to the bathroom. About 30 seconds later the window exploded and went on the bed just where we were. My wife started to cry because had we stayed there we would have been killed…we stayed in the bathroom for the rest of the night. The place was shaking like an earthquake. Water was all over. We climbed in the tub in the bathroom and stayed there until morning.

"It was a very scary experience, I was shaking. My family was with me so I had to play like I was brave but in my heart I was scared, worried and trembling.

"We were stuck at the Retreat House, seven of us, for 32 days. The Retreat House was destroyed; we had no access to the road and getting to the main road was taking us two hours (we normally take 10 minutes walking). So we were isolated for 32 days and to get food etc. it had to be delivered via a helicopter".

He continued: "When we saw day break the day after the hurricane and realized how bad things were we banded together as a group and decided that given the situation and conditions, we were going to be at the Retreat House for a while and so started putting things in action. In the Retreat House, had two cartoons of chicken which was to have been used for retreat purposes; so we smoked it to ensure that it was preserved and then we went in a survival mood.

"We organized ourselves and laid out tasks for each one since we recognized that we were trapped. We planned how much food we would be able to eat, how much water to drink and we just bolted down for the long run.

"Five days after the hurricane we decided to venture out since we had no mood of communication. We reached to the entrance of the Retreat House in Eggleston and that journey took us nearly three hours given the numerous landslides and fallen trees that we had to traverse through. On arrival we got some signal on our FLOW phones. It was not the best but enough for us to make contact with the outside world, friends and relatives to say we are alive and safe but trapped in the Retreat House in Eggleston.

"About two weeks later we got some signal from DIGICEL which enabled us to make contact with local family and also send emails etc. out," Sanford said.

"This was one of the most frightening experiences I have had but it taught us a simple lesson that in life. In order to survive, we need one another. Seven of us, a dark place, no electricity food not-a-plenty and conditions rough. We shared our thoughts and experiences. This bonded us closer together. We have formed a community in the Retreat House; we are still there, all seven of us. We cook and share and look out for each other. We got electricity three weeks ago.

"I say to God be the glory, we are alive and survived and the seven of us have gotten closer to each other as we remain in the Retreat House."