RUBIS employees given walking papers plead for their job 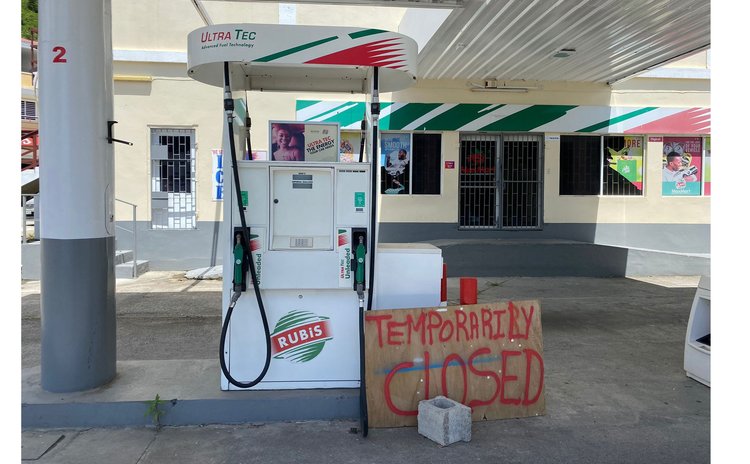 Fearful of losing their only means of survival, employees of RUBIS West Indies Limited, Dominica (RUBIS Dominica) have rallied together to plead with the government for their intervention in saving their jobs.

Armed with their placards, the employees gathered along the E.O. LeBlanc Highway in front of the company's main compound in Canefield in a protest they dubbed as "for survival."

"We are holding a mini protest for survival," employee Heskeith Delsol stated. "By the end of September if the government and Rubis are unable to reach a solution, we will be without a job. Most of us here have mortgages and if September 30th comes and the government doesn't do anything then we will be in big trouble."

This comes as effective September 15, 2022, RUBIS Dominica, the distribution company of petroleum and aviation fuels, LPG and lubricants, announced the suspension of fuel sales to its customers, following what the company says is significant financial losses incurred since entering Dominica in 2011 and which they have accrued at an even greater pace for the past six years.

"These losses are due to highly unfavourable mandated fuel prices, which are below the true importation value of fuel," the release stated.

A similar action had been announced by RUBIS Dominica in 2021; however, according to the company, at that time, the Government of Dominica agreed to implement some changes to the regulated prices aimed at partially restoring the profitability of the fuel distribution business in this market, with further actions promised for the first quarter of 2022.

"Unfortunately, the Government of Dominica has not taken any further actions to restore the profitability of the fuel distribution business and RUBIS Dominica has continued to incur significant losses as a result," the company noted in the release.

RUBIS Dominica Country Manager, Nicholson Dodds who spoke to The Sun stated, come September 30, 2022, should their longstanding issues not be addressed by the government, the company will cease operation in Dominica.

He informed that while the company has ten direct employees, several other contractors and employees at the service stations will be affected should RUBIS permanently shut its doors in Dominica.

Dodds added, although RUBIS is the only major importer to suspend their services at this time, he contends, "we are not the only ones hurting."

When questioned on the possibility of RUBIS continuing their services in Dominica should importers not reach a resolution with the government, Dodds said, "if the environment sometime in the future is feasible and the investment climate is susceptible to investors I think not only RUBIS but other companies we be willing to investment but we can't continue to invest in a market where our returns for several years has been negative and there is no end in sight."

In response to the announcement by RUBIS Dominica to suspend their services, Prime Minister Roosevelt Skerrit told the nation during a live interview on State-owned Radio DBS "there is no need to panic" as his government is putting contingencies in place to deal with this matter.

He explained that since 2003 the government has had a price mechanism in place with the support of the suppliers of petroleum products in Dominica.

"Since then there are other countries in the Caribbean who have adopted that price mechanism…we started first of all with having the price changed every eight weeks, this was further reviewed on the request of suppliers of petro products in Dominica to four weeks, where every four weeks there is a change in the price."

In response to the company's claims of working at a loss, the nation's leader stated: "We did give an increase early this year, but we have always said to RUBIS and others that one has to be mindful of the global reality and we cannot go ahead and give you an extreme increase in the profit margin in one-fell stroke, let us take it in a systematic way."

Furthermore, he indicated that his government will continue to engage RUBIS and other suppliers of petroleum products in discussion through the Ministry of Trade to determine what can be done.

In the meantime he says, his government will make available a significant quantity of gasoline and diesel to Petro Caribe to supply to the gas stations in Dominica.