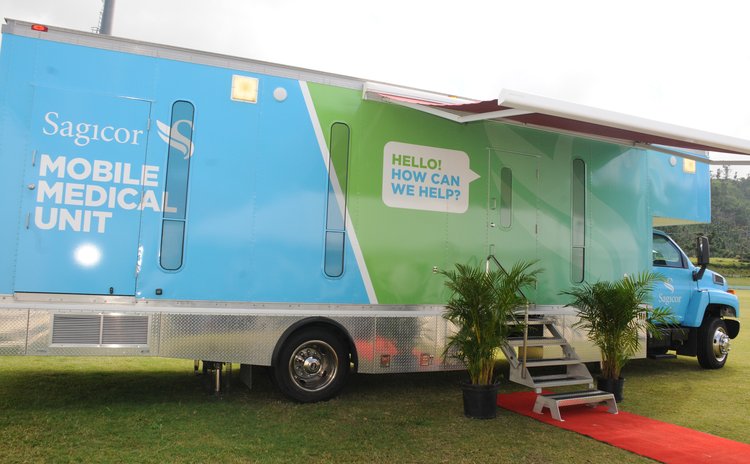 Sagicor Life Inc. donated a full customized, mobile medical unit to the Government of Dominica at a ceremony at the Windsor Park Stadium on Friday last week.

"Dominicans may have seen the mobile unit in and around the island since January, as it arrived on island then; however, we have been finalizing outfitting and other details," said Donald Austin, CEO for Sagicor Life Inc. for the Eastern Caribbean.

Austin said: "This Mobile Medical Unit was outfitted and branded in Ohio, driven down to the Miami port, moved onto a barge which first went to Jamaica, and, a few stops later, drove off the port of Roseau.

He added: "The extensive outfitting of the .Mobile Medical Unit ensured that it contained a wide range of facilities including, but not limited to two examination rooms with beds; fuel and water tanks; a generator; refrigeration unit and medicine storage and a wheel chair lift.

Sagicor supported the acquisition of the bus from a financial perspective, donating US$100,000 to purchase. Austin shared that other elements, such as recommendations about what would be the best mobile unit, recommendations on outfitting, the requirements of the bus and the networking required to complete the purchase, were led by Doctors in Our Circle, a network of Dominican doctors, as well as doctors in other countries who are working together to support the medical needs of the people of Dominica.

Austin said: "It was due to our relationship with the doctors on the island, because of the business in which we are involved that we learned of this project and decided to get involved. Since the passage of Hurricane Maria, our objective has been to understand how best we can help Dominica recover. Medical needs are eternally present, so when they came to us, we immediately knew it was the right thing to do."

The Unit which is painted in Sagicor's signature blue will be called the Sagicor Medical Mobile Unit.