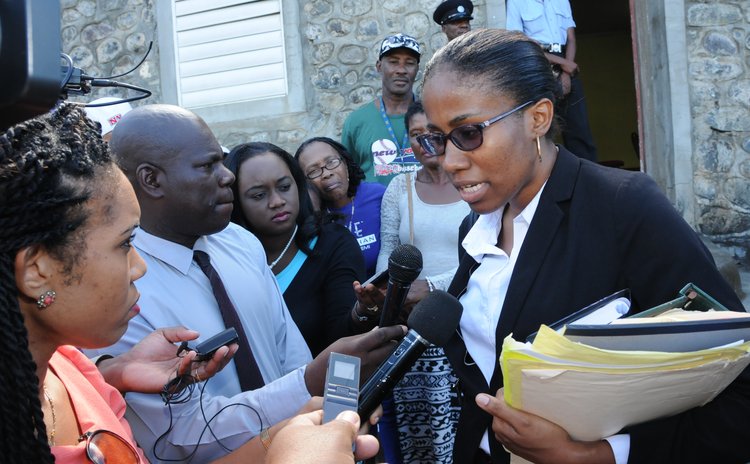 Some people waited for another clash of people power and the force of the police; but it did not come.

Maybe the futility of the on-going confrontation between the people of Salisbury and the Government of Dominica, with the police at the frontline, has finally sunk in.

In any case when dozens of people from Salisbury arrived in vans and pick-ups and buses at the St. Joseph magistrate court to witness the trial of 52 protesters, none of the expected resistance from the police was apparent. There were no barricades, no guns and no police in riot gear. That was indeed unusual.

Two days before the case was held the Parliamentary Representative for Salisbury, Hector "Spags" John, told Q95 FM that a number of villages had held a meeting in the village to decide on the response of the villagers to the trial. They were expected to gather in large numbers at the magistrate's court in St. Joseph.

"It is untied community effort; we are going to give support to our people. This is a threat to our democracy and Salisbury is standing up," John said.

He added: "As a community we are standing for everybody. We must not let any police officer, anyone in leadership, violate our rights.

"We will not be pushed over. We will not play dead. We refuse to allow people to ride on us".

Recall that the confrontation between the police and the people of Salisbury flared again after the police issued summons to villagers who participated in a demonstration in the village in May, 2015.

A copy of the summons issued to an alleged protester Derrick Peters by Sergeant Williams J states that on May 11,2015 Peters "unlawfully, riotously, tremulously" assembled together with more than 12 others to cause a disturbance of the peace and that he did not disperse "within the space of one hour" when he was ordered to do so.

In a comment to Q95 FM last week Lennox Linton, the Leader of the Opposition United Workers Party (UWP) said the people of Salisbury had a right to demonstrate and that court case was frivolous.

"In Dominica in 2015 the police are holding up something that says they (the protestors) were tumultuously assembled," he said "What sort of foolishness is that."

On Tuesday at the St. Joseph playing field which lies just below the court house and in front of the white-walled historic St. Joseph Catholic Church, Linton and dozens of villagers formed a circle, held hands and prayed. Then in single file they walked up the incline to the Court. There they waited quietly as a police officer called out the names of the protestors who were summoned to appear before Magistrate Bernard Pacquette.

After two hours the accused persons walked out of the court to the cheers and loud shouts of the on-lookers. The case had been postponed to April 2016 because the prosecution was not ready.

Lawyer Cara Shillingford, who is a member of a legal team representing the villagers, told the press afterwards that the director of Public Prosecution had seen the prosecution's file one day earlier. Another reason for the delay was that the police had problems with the identification of the persons whom they charged. Vidal said she believes that the defence has a strong case.

"The persons who were brought before the court today were elderly retired citizens, farmers, harmless people," she said. "So I cannot foresee at this stage the prosecution proving that this goup of 52 persons were riotously conducting themselves etc."