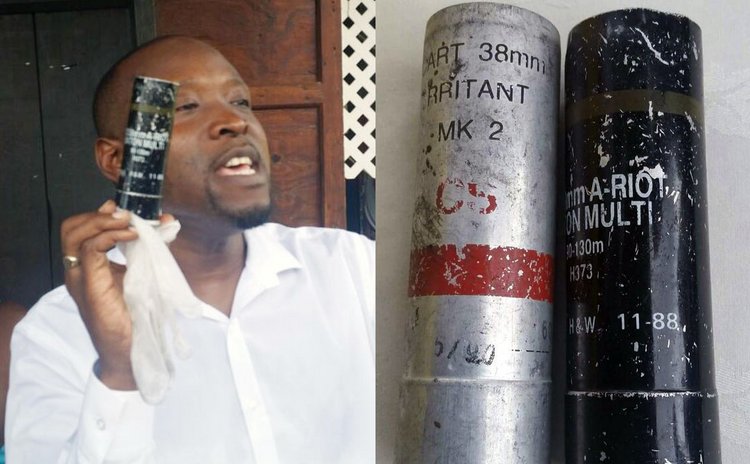 Two weeks ago there were tears aplenty in Salisbury, that west coast village that the police peppered with teargas when the community protested the conditions of farm roads two weeks ago.

Now Salisbury is crying again. Villagers learnt on Monday last week that they were dosed with teargas that had been expired for decades and no one knows what effect that the old gas has had on their lungs.

"The canisters were unlawful to be used against animals let alone the good people of Salisbury," said Tiyani Behanzin, an attorney at law, former magistrate and son of the late Prime Minister Rosie Douglas.

At a meeting with villagers, Behanzin said the police used very old equipment to discharge very old teargas. "What I have discovered is that when teargas is more than five years past its manufactured date it should not be used in any operation," said Behanzin. "Secondly on the canisters themselves when it's past the four years or five years to be used in operation, it is said it cannot be used for training purposes".

He said some of the canisters had use-by-dates of 2009 and some were 25 years old.

Behanzin said he is concerned about the precise contents of the projectiles that the police used to disperse the crowd, when they blocked the Edward Oliver LeBlanc highway, because the material was extremely old.

"We were particularly concerned about what precisely were in these projectiles, whether there were health issues," said Behanzin but he did not quote any medical or technical authorities.

Tear gas is a general term covering more than a dozen chemicals that irritate the eyes, mouth, throat, lungs and skin. The effects are usually temporary, up to an hour, although long-term exposure to large amounts in confined areas can damage eyes or cause severe breathing problems, especially for people with asthma.

"I'm already in contact with Amnesty International and the UN agency that assist human rights around the world," he said. "We will write CARICOM to encourage the Government of Dominica to hold a public enquiry into the incident of last week in Salisbury."

Having initially remained silent on the Behanzin charges, the police issued a statement on Wednesday that indicated that the force the police used "was reasonable and justifiable in the circumstances" where it had to control "a riotous mob".

"The Commonwealth of Dominica Police Force has by law an arsenal of weapons and ammunition in compliance with the United Nations Convention and international law," said the police public relations officer Assistant Superintendent of Police Claude Weekes on state-owned DBS radio. "The Dominica Police Force did not use weapons of mass destruction, biological, radiological or nuclear weapons or wide burning phosphorus. The ammunition falls under the United Nations conventions and international law." Weekes' statement did not refer to the use of expired canisters of teargas.