Villagers block roads and the police use tear gas 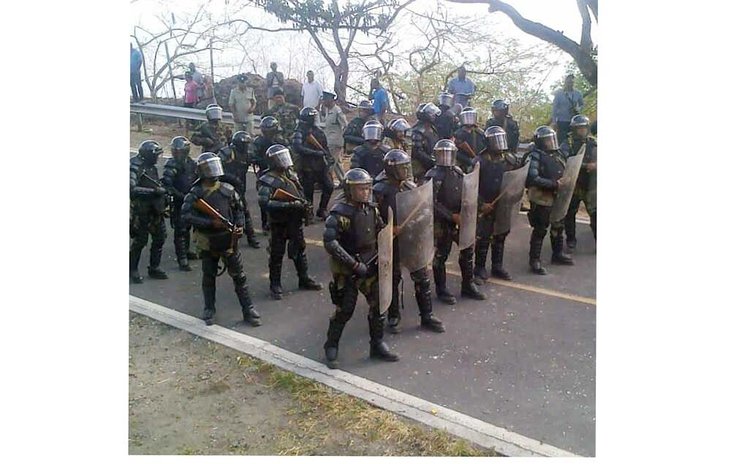 She rumbled and growled and then she exploded.

Salisbury erupted not with ash and fire and molten rocks like a real volcano but with anger and conflict and rocks and Molotov cocktails and bottles. Then the tear gas came.

"A couple of our men are injured," said police spokesman Assistant Superintendent Claude Weekes speaking to the press during a lull in the battle for Salisbury. "I can tell you volleys of stones, cocktails, all kinds of things are pelted at us. Really, truly we came under a barrage."

The conflict started this morning when the people of Salisbury, a sleepy agricultural village on Dominica's west coast, decided to occupy part of the Edward Oliver LeBlanc highway that bisects the community. They insisted that Government must repair their feeder roads without further delay.

"We beg for our feeder roads already," said an angry villager. "We just want the minister to have half-an-hour meeting with us, just that"

"Tell de minister to come down here, give us de assurance they going to fix de road for us," said another man, his voice brittle with anger.

"Fifteen years we want repairs," said a third man who said he's a farmer. "Nothing has been done, so that is the only way to make de government know that we serious."

"We have been asking, we paying our taxes, we deserve some attention on our farm access roads," said Hector John, the parliamentary representative and member of the opposition United Workers Party. "We will stand for what we rightfully deserve."

Since traffic was severely interrupted, the police came with guns and they were determination to clear the road but the people would not move. The police warned them.

The people answered with more stones and bottles; the police responded with tear gas.

As the restive village was getting ready for sleep tonight Rayburn Blackmore, the national security minister accused their leader, Hector John, of being unwilling to end the protest. In the heat of the demonstration, Blackmore said the government offered to meet a delegation of villagers; that discussion would have been followed by a town-hall meeting.

"It is instructive to note that Mr. Hector John has refused the offer and insisted that the ministers come to the demonstration site," Blackmore said to State –owned DBS radio. "This type of behaviour is totally unacceptable."

Blackmore added that the people of Salisbury violated the law "in the most blatant manner.

"That cannot be allowed to continue," he said.