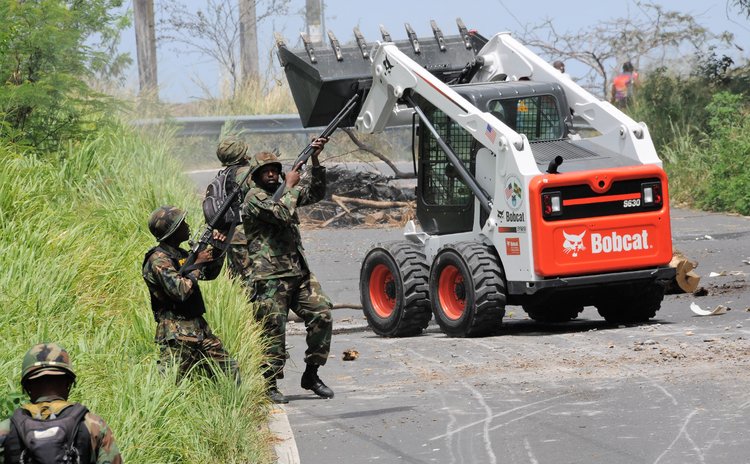 Today protesters blocked the Edward Oliver LeBlanc Highway near Salisbury and police battled a hostile crowd as they moved to clear the blocked roadway.

In the process gunshots and teargas were fired but there were no reports of injuries.

From the Roman Catholic church up to the junction leading up to the centre of the village, protesters blocked the road at five locations about 50 yards apart with tires, old washing machines, dried trees, garbage and debris.

Using a Bobcat, the police began clearing the debris at about 9.30 am to the south of the Catholic Church building.

Then about a dozen policemen dressed in army fatigue and carrying automatic rifles moved slowly towards the village.

On top of the hill overlooking the highway men wearing cloth masks over their faces stood ready to throw stones and other missiles towards the highway.

Half-way up the hill the police phalanx stopped and a policeman began shouting to the masked men who sat more than 150 feet away up the hill, among the bushes.

"Who representing all you? I want to talk to somebody," the policeman shouted but the men's responses were incoherent.

"We need somebody to talk to. What all you protesting about?"

"Our drinking water. We protesting for two years we doh have drinking water," a man who stood nearby answered. "And the law they going to pass."

After that exchange, an unarmed policeman accompanied by a villager walked towards the village but returned an hour later apparently without arriving at an agreement with the protesters.

Then the Bobcat, protected by armed police officers dressed a full riot gear, began clearing the other blockages.

As the vehicles, trapped on both ends of the blockage began moving north and south, the villagers again began taunting the police and members of the press.

Later the protesters blocked the road again and threw stones at the police; the police fired their guns and threw teargas.

Salisbury, a stronghold of the opposition United United Workers Party (UWP) has been a hub of protest action in recent years. In June 2015 farmers and villagers blocked the highway to protest the poor conditions of their farm roads. After the police arrested and charged a some people a few weeks afterwards, villagers rioted again. The police responded with guns and teargas.

On State –owned DBS radio this afternoon, Rayburn Blackmore said he condemned the action of the villagers of Salisbury and Daniel Carbon, the Police Commissioner gave a grave warning to people who break the law.