Sammy says "I didn't care who was bowling" 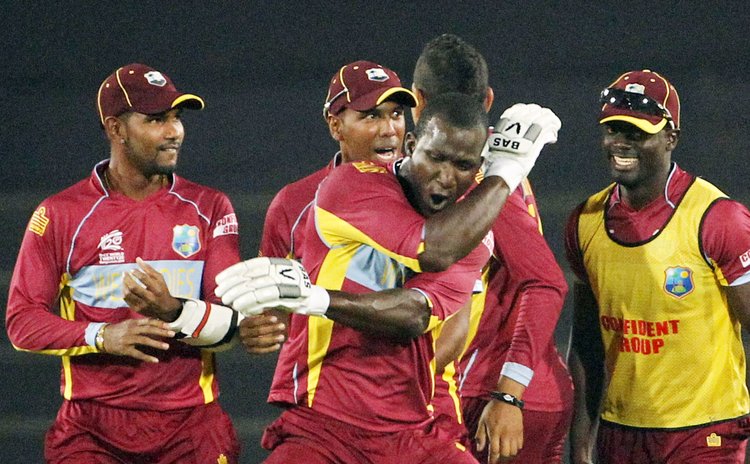 With 12 to win in the final over from James Faulker, the skipper blasted two massive sixes to end on 34 not out off 13 balls – the highest score of his T20 International career.

He piloted the world champs to 179-4 off 19.4 overs – their highest run chase in a T20 International. The total surpassed the 170 they made when they beat the same opponents at the Oval in London in the 2009 ICC World T20 event.

Sammy came to the crease with the asking rate at 14 runs per over and added an unbroken fifth wicket stand of 49 with Dwayne Bravo – who hit a vital 27 not out off 12 balls with two sixes and two fours. Earlier Chris Gayle was his best with 53 off 35 balls to provide a strong start.

The result was the West Indies' second win in a row. They will face Pakistan in an all-important match on Tuesday in a bid to reach the semi-finals.

"I didn't care who it was bowling, we just knew we had to get 12 runs but it makes you feel even better when it is the guy who was talking a lot before the game," Sammy said.

"He bowled some very good yorkers but I stayed low and I got under the ball, which was what I wanted. It is just a good feeling. We needed a win, it was a crucial match for both teams. We held our nerve under pressure better than them and we are very happy with the result."

He continued: "West Indies acted today. It feels very good to come home. It was not an easy win. We fought for it. That win will definitely lift us and the people back home in the Caribbean.

"We felt if we took the game to them and applied pressure we could get off to a good start. That's why from the first over, Gayle went after the bowling. That's the kind of pressure we are talking. Like I said before, we don't talk of the cricket. Cricket is played out there in the middle. That's what we were focussing on."

Sammy was at the helm back in 2012 when the West Indies beat Sri Lanka to win the title. He said the focus was on retaining the trophy.

"We didn't turn up against India (in the first match) but after that, we have played well. We have not peaked as yet but we are winning games. Hopefully we could peak even better later on in the tournament and win the games that we have to, and come out and achieve our goal which we left home to do, which is to defend the title."