Sammy: We did not respond well enough 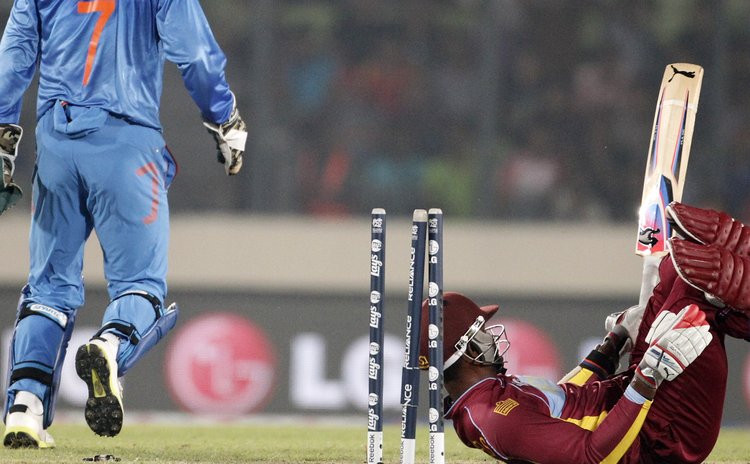 DHAKA, Bangladesh – West Indies lost their opening match of the ICC World T20 by seven wickets to India at the Sher-e-Bangla Stadium on Sunday night.

The defending champions got off to a slow start with the bat and eventually mustered 129-7 off their 20 overs. The topsore was 34 from Chris Gayle while Lendl Simmons made 27. India replied with 130-3 off 19.4 overs, as the Windies bowlers took the game into the final over.

After the match skipper Darren Sammy said his side did not respond well enough to the Indian bowling attack but promised a much better showing when they face Bangladesh at the same venue on Tuesday night.

"We just didn't respond well enough to their spinners – round one goes to India. I have a strong feeling that we will meet again, so we are looking forward to that. They used the conditions quite well. It's a fact that we just didn't bat well. We didn't bat well and we still got to 130," Sammy said.

"We will take heart from that but we never kicked off in the innings. Simmons played some good blows in the late overs but apart from that we never really got those big overs we required...we didn't get that big moment and we were always behind the eight-ball.

"It is no need for us to panic. We have three more first round games to go in the tournament against Bangladesh, Australia and Pakistan and we back ourselves to win all three and reach the semi-finals. We are here to defend our title and we will give our all."

Sammy added: "In the bowling department, though we didn't bowl as well as we could be we took it down to the end. We tried to take it down to as late as possible – to try and take the game as deep as possible into the last overs. Net run-rate normally comes into play in these tournaments. They getting the runs with two balls to spare, it is a plus for us.

"In the next match we have to bring our A game against the home side. We still believe we will be a force in this tournament so we will aim to come back hard against the Bangladeshis."

West Indies will have a full training session on Monday afternoon at the Dhaka nets. Tuesday's match against Bangladesh will start at 7:30 pm (9:30 am Eastern Caribbean Time/8:30 am Jamaica Time). (WICB)