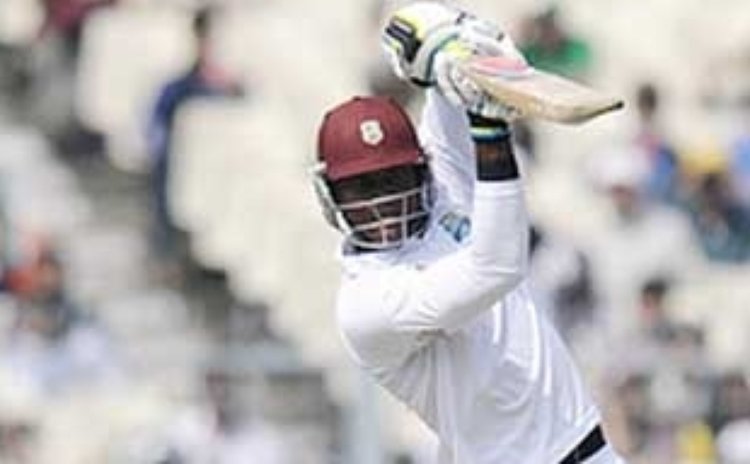 KOLKATA, India – Marlon Samuels said West Indies fell short of the batting targets they had set for themselves, but they were prepared to fight hard to remain competitive in the first Test against India here.

Samuels hit the top score of 65, but Test newcomer Mohammad Shami grabbed 4-71 from 17 overs, as the Windies, choosing to bat, were bowled out for 234 in their first innings on the opening day on Wednesday at Eden Gardens.

It was the third time in as many matches that Samuels has past 50 at this venue. His maiden Test hundred of 104 came 11 years ago here and he also scored 84 in the second innings two years ago.

The 32-year-old Samuels has risen to become one of the linchpins of the visitors' batting over the last two years. He was looking typically in cruise mode when he was undone by a delivery from Shami that kept low and moved back sharply to extract his middle stump.

"I wouldn't say we achieved all we wanted," said Samuels. "We set out to achieve a particular total, but we fell short.

"We are very disappointed. It is something we have to go back to the dressing room and discuss. The runs however, are on the board and it is our duty to make India fight very hard to past that total first."

He added: "Whenever you play Tests in India, you always look to score a total in excess of 400 in the first innings, particularly if you are batting first. This would help you set up the Test match and almost guarantee taking it into the fifth day."

Samuels said the Indians bowled tightly and were consistent in their home conditions.

He also reckoned the pitch played a few tricks: "There was a bit of awkward bounce and a few deliveries kept low, so the bounce [from the pitch] was not consistent, but it was still a good pitch to bat on."

About the way he has been batting in recent years, Samuels said: "When you play a format consistently, you learn a lot about it, spending hours in the middle. Because I have batted a lot in Tests over the last couple of years, my batting is coming together. Most importantly, it is because I love batting in Tests."

Samuels said he was hugely disappointed not to have transformed his score into a hundred – after all, one of his cricketing heroes was watching from close proximity.

"I was very disappointed, mainly because Sachin was on the field and I couldn't get yet another hundred in front of him," he said.

"He is the greatest cricketer to have ever played cricket and my idol. I am shattered to have missed out on scoring a hundred. I am sure he is enjoying himself right now, but we will try to get him out early. I don't mind him scoring a little 20. We don't have plenty of runs on the board and we have to play very hard from here."

India resume on the second day from 37 without loss with Shikhar Dhawan, not out on 21, and Murali Vijay, not out on 16.