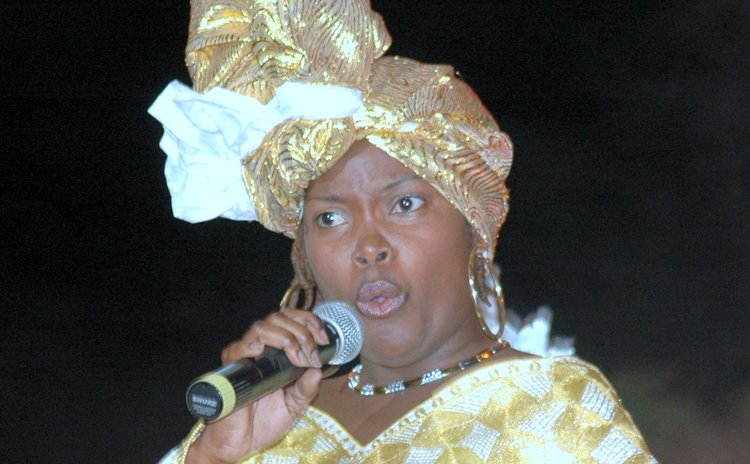 Sandy performs at the Calypso Finals in 2007

She says it's not worth the vicious mapwi, mové langé and mal palé directed at her, so she's pulling out of the Quarter Finals of the 2014 calypso competition and she is returning to the United States immediately. Sandy, we'll miss you in the finals.

Alex Bruno, Sandy's manager, told the Sun on Saturday that the current controversy about her entrance into the competition has brought Sandy's good name into disrepute.

"Sandy is not known for controversy," Bruno said. "We do not think it is right for Sandy to enter a competition under such duress. She's disappointed and hurt".

Bruno added: "She's done so much for women in the art form and even her peers, the women, are the ones getting on her case, insulting her, embarrassing her in public, cursing her. It was nasty."

"It doesn't make sense. It's not worth it," Sandy said.

The controversy began when the Dominica Calypso Association (DCA), following their established policy, allowed Sandy to skip the elimination round of the calypso competition. But then Dominica's leading calypsonian protested.

"It's a case of what's good for the goose is good for the gander," Dominica's six- time Calypso King Dennison "Dice" Joseph said earlier this week, adding that he is seeking answers as to the reason why he, at the time a three-time king, was not given a bye to go to the quarter finals but, Sandy, a first runner up, is offered that privilege.

However, calypsonian and president of the DCA, Derrick "De Hunter" St. Rose said it was not the first time that the executive has taken such a decision.

"Yes, I has happened before, we did this for Tronada who is a former King, and because he lives in the US and it was really hectic and expensive to be in Dominica for all the shows, we gave him a bi and he won the crown on two occasions, I think, so we figure out that he was at a certain level. So he didn't have to go through that process." Hunter said.

He said the DCA gave Sandy the go-ahead since "we figure out that seeing that she was the "calypso queen" of Dominica, she didn't win the crown, but she came out first runner up. She reached the highest peak so we gave her that concession." But Dice is hearing none of it, since according to him, when it was his turn he received a lot of pressure and he was not considered.

Bruno argues that Sandy earned the "courtesy" that the DCA offered.

"No favour was given to Sandy," said Bruno. "Sandy e-a-r-n-e-d the position that she got."

Prepared for the battle

Is Sandy pulling out because she was not prepared? No, of course not, both Sandy and Bruno insist.

"She decided she couldn't deal with it," Bruno said. "Not that she's a wimp but she felt the honourable thing to do is to allow the people who are dissenting to have their say and leave to fight another day."

"The standard I had in calypso is tarnished," said Sandy. "I don't feel comfortable and I will not be able to give my best."

"She was ready (for the competition) with two huge calypso songs and even more ready than anyone else," Bruno said. "She's ready to sing in the finals tonight, if she had to."

Sandy said she made tremendous financial, professional and family sacrifices to participate in the 2014 competition "but there's so much I can take."

"I really appreciate the Calypso Association for giving me the opportunity and the recognition because of the contribution I have made to calypso. I deserved that," Sandy said. "That (the controversy) will not prevent me, if I want, to come back next year."