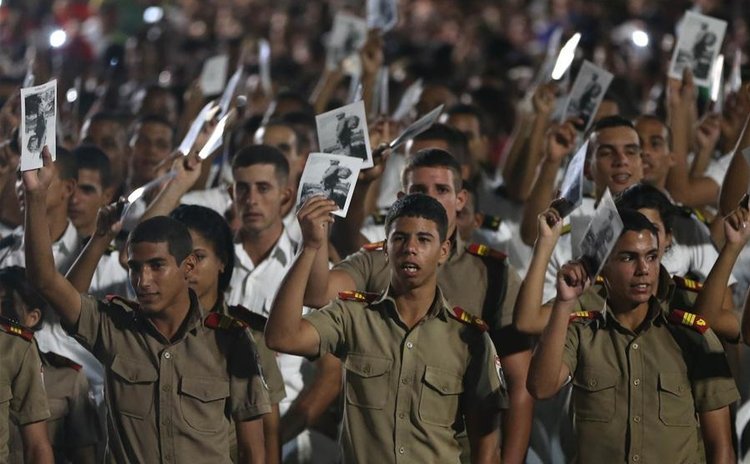 Castro's ashes are to be interred at the Santa Ifigenia Cemetery on Sunday, alongside the remains of national hero Jose Marti.

Though the burial ceremony will be a private family affair, hundreds of thousands of people are expected to converge on the southeastern city for Castro's funeral on Saturday night at the Antonio Maceo Revolution Square.

Posters and pictures of the revolutionary leader have been placed all over the city, and many locals are wearing black armbands as a sign of mourning.

"Santiago de Cuba is a heroic city that has always set an example of what freedom is, and I am proud that our commander will be here and his remains placed at the Santa Ifigenia Cemetery," Juan Hernandez, a Cuban state worker, told Xinhua.

Santiago was the first major city to fall to Castro when he led the revolutionary movement to overthrow dictator Fulgencio Batista in 1959, and has long been considered the "cradle" of the socialist revolution.

It is also where Castro began his revolutionary struggle, leading a failed attack on the Moncada military barracks in 1953, then considered site of Batista's second-largest garrison.

"Santiago de Cuba was the cradle of the revolution and we always knew that in the end he would come to our city to rest next to the national hero, because Fidel, like Jose Marti, defended the ideals of social justice for the people of Cuba," resident Mercedes Larduet, a teacher, said.

Castro's motorcade is to arrive on Saturday and pass through the main streets and historical sites of the city, receiving what is expected to be a massive welcome.

"Fidel loved Santiago because he lived here in his youth. I think it is an honor for our city to be the place where his remains rest," resident Luis Toranzo told Xinhua.

Tens of thousands of Cubans have greeted Castro's funeral cortege on its journey across 13 of Cuba's 15 provinces to Santiago.

Considered one of the most prominent leaders of the 20th century, Castro spearheaded unprecedented levels of development in Cuba, whose quality of life indexes often rival those of much larger and richer nations.

After 47 years in power, in 2008 Castro officially retired due to health problems, and occasionally wrote editorials on world events.