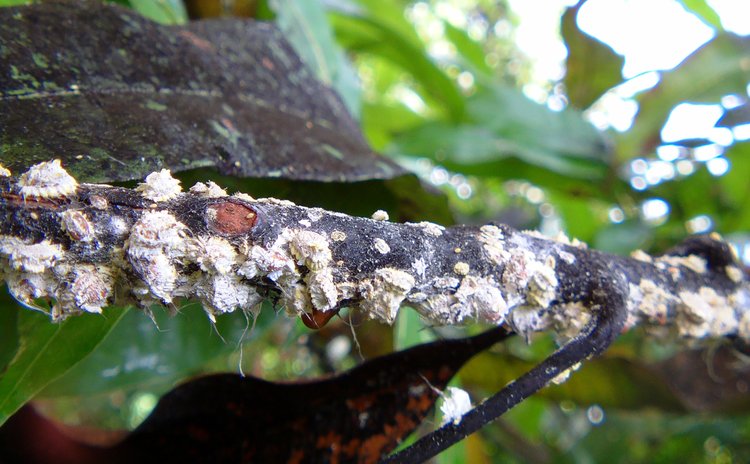 Even as Dominica tries to wrest control of the Black Sigatoka fungus, a new battle has begun-- this time against the Icerya seychellarum (scale insect), another recently confirmed and identified invasive species.

Agriculture officials have said that the highest population of the insect is in Balizer, La Plaine, although small pockets of infestation have been found near the deep water harbor and in the Botanic Gardens.

The insect was positively confirmed and identified in December, 2014, after a farmer drew it to the attention of the Division of Agriculture the month before.

Agriculture Officer at the Plant Protection and Quarantine Service, Nelson Laville said the scale insect population in La Plaine is high partially due to the recent dry spell, which provided favourable conditions for the insect to multiply.

Describing how the insect causes damage, Laville said it feeds off the leaves and stems of plants by sucking the hosts' nutrients. This results in a weakening of the leaves.

Additionally, it excretes a sugary substance which promotes the growth of sooty mold. The mold eventually covers leaf surfaces and blocks the penetration of sunlight, affecting the plants' ability to make and use food.

The scale insect feeds on various species of plants, including the banana, which is already under attack from the Black Sigatoka fungus.

And, with the exception of the bay tree, Laville said every type of crop is affected in La Plaine. He suspects that the bay tree may have some repellant properties.

While the population of the pest is high in La Plaine, quantifying the loss of crops directly due to the pest is difficult since Dominica has just undergone two months of dry weather, Laville pointed out. However, he agreed that the scale insect could have been an added factor to the decrease in production.

The Unit has explored the option of pesticides, but with little success.

Laville explained that the scale insect, like other soft-bodied species, has a white covering of 'fluff' which protects it from the direct rays of the sun and other environmental elements (including pesticides).

As such, the Division has settled on biological control using beetles and wasps.

"We collected and identified three beetle species which are predators; they basically hunt and kill scales," Laville said. He acknowledged that the process is lengthy, but noted that it is an effective method of management.

The next step is to expand the beetle-rearing programme and release more into the affected areas.

He said that some of the beetles were placed in La Plaine with good results.

The eggs hatch, producing larvae that eat the host. Laville said the parasitoid wasp can cover a wider surface in less time. As such, the combination of the wasp and the beetle will be more effective.

The Unit believes the parasitoid wasp is native to Dominica, but is still working to identify it.

While Dominica has had success in using biological control against the pink mealy bug and citrus black fly, Laville however cautioned that it is not an overnight solution. In fact, the process is long, but it is sustainable.

He also clarified that biological control is a management programme not an eradication process.

Meanwhile, Agronomist Bernitta Serrant, who is spearheading the control programme, said the beetles being used in the fight against the scale insect, still have to be officially identified.

However, five mesh cages have been set up in Balizer for the beetles to multiply in field conditions before they are released into the environment.

Farmers are encouraged to call the unit if they encounter the scale insect on their plants.