An 8,000 per cent jump in the number of cases and vaccine hesitancy worries PAHO's Dr. Carissa Etienne 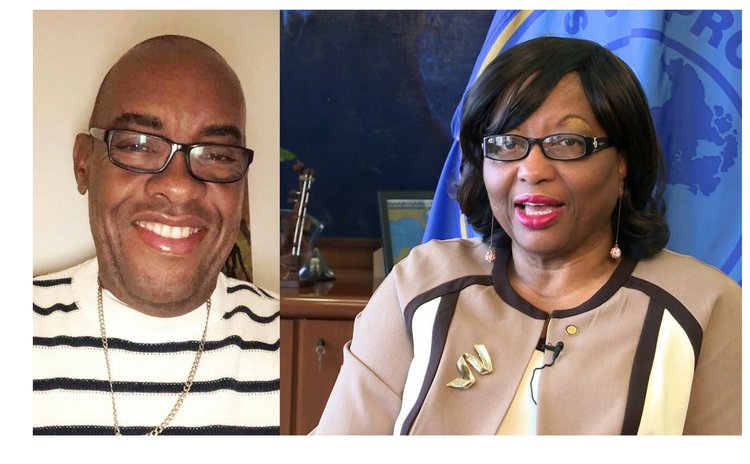 Ask the pharmacist Val "Young Bull" Cuffy to dispense advice to people who remain uncertain about whether they should get a COVID-19 shot and his prescription is clear: check with your doctor.

"I would suggest that people do a medical consultation with their private physician and then make that determination in lieu of the scientific data that is presented," the fully vaccinated Cuffy told The Sun. "Don't just go on your own and decide, 'I'm not taking the vaccine' because some alumni of the University of Google or YouTube have gotten their . . . conspiracy theories and then you decide that you're not taking the vaccine."

It's the sort of advice that most people in health, including top immunologists, give even as they stress the importance of taking the shots. But it can also backfire, as not only are a worrying number of medical practitioners in the Caribbean refusing to get vaccinated against the highly contagious and deadly virus, they are also advising their patients against taking the jab, a recent survey by the Pan American Health Organization (PAHO) found.

"We did a survey recently in the Caribbean and there is significant hesitancy among nurses and doctors of the Caribbean," the PAHO director, the Dominican physician Dr Carissa Etienne, told The Sun. "And when that is happening, it's no surprise, therefore, that their patients are also hesitant."

Take, for example, a kidney patient who visited a dialysis centre and sought the nurse's counsel on the safety of the vaccine. The nurse advised against taking it, Dr. Etienne revealed.

"Based on what?" the PAHO head asked. "Dialysis patients are dying in high numbers from COVID, it is precisely this patient that should have vaccination, but a nurse that doesn't understand anything or knows the technology or the science, tells this patient don't [get vaccinated]."

At the root of the problem is a lack of understanding among some of the medical practitioners, particularly those who graduated a long time ago, of the mRNA technology used to create the COVID-19 vaccines, said Dr Etienne. While this technology isn't entirely new – the HIV/AIDS vaccine was based on mRNA technology – "it is new technology to many of the doctors who graduated, certainly eight years, ten years ago."

It's a "scary and disappointing" situation, said Dr Etienne, since doctors and nurses are supposed to "lead their fellow citizens into the right path," therefore, their hesitancy, coupled with a relentless anti-vax campaign, is complicating matters for health authorities, who are struggling to contain the virus.

Proof of the impact of this campaign is evident here by the fact that fewer than 20,000 people have been fully inoculated as the voices in opposition to the jab grow stronger. This push-back against the vaccines comes as somewhat of a surprise to the PAHO boss, mainly because "the Caribbean, for the last 30 years or so has always had very high coverages in terms of other vaccines.

"For the entire region of the Americas, it is the Caribbean countries that have led the way in terms of elimination of these vaccine preventable diseases, in terms of the level of coverage for all of these other vaccines. So, I'm surprised by this copycat attitude all of a sudden," she admitted.

The end result could be a cataclysmic rise in the number of cases and a "significant numbers of deaths," particularly as the Delta variant takes hold.

While there have been no confirmed deaths from the virus here, and there are no reports of the Delta variant - which has been confirmed in St. Lucia, Grenada and Trinidad and Tobago - an 8,000 per cent jump in the number of cases in the first two weeks of this month – from nine at the start of the month to 727 as of Saturday – should give everyone pause.

The administration has blamed a bike crawl, along with an associated gathering at Pottersville on 25 July, for the initial outbreak, prompting the prime minister, Roosevelt Skerrit, to announce restrictions, including a curfew and increased fines for people who fail to adhere to the public health act.

"We will be accepting no nonsense in the country over the next seven days and beyond," warned Skerrit at the time. ". . . we must all as responsible citizens play our part and adhere to the measures and protocols."

However, the governing party's own actions appear to suggest that the prime minister and members of his governing party top the list of those who let down their guard and fail to adhere to basic protocols. Super-spreader events, such as those on the boardwalk in Roseau, are being organised or funded by government members, including ministers, according to some observers.

And, at one of the largest gatherings organised by the administration since the COVID-19 outbreak, the signing of the contract for the international airport at Windsor Park stadium in June, top officials, including the president, the prime minister and members of the cabinet, could be seen close together without masks. So, too, were the vast majority of the packed, garrulous crowd invited to the spectacle.

There was a similar scene at the opening of a netball and basketball court at Windsor Park in June, where Skerrit could be seen mingling with the crowd – albeit much smaller than the airport signing event – without a mask.

Actions like these suggest to Dominicans that there's no need to be concerned about the spread of COVID-19, cautioned Cuffy, the pharmacist.

"It is disrespectful to the ministry of health and the government when people who should know better are sponsoring these activities and giving their blessings to it, and at the same time they are on the other side, sitting at meetings, discussing all we can do to curb the rise of COVID-19. We are sending mixed messages, especially to a generation that doesn't have both oars in the water," Cuffy told The Sun. "The mixed signals coming from government officials . . . equal what we have now: hesitancy to vaccination, hesitancy to doing what is best for the overall good of the country."