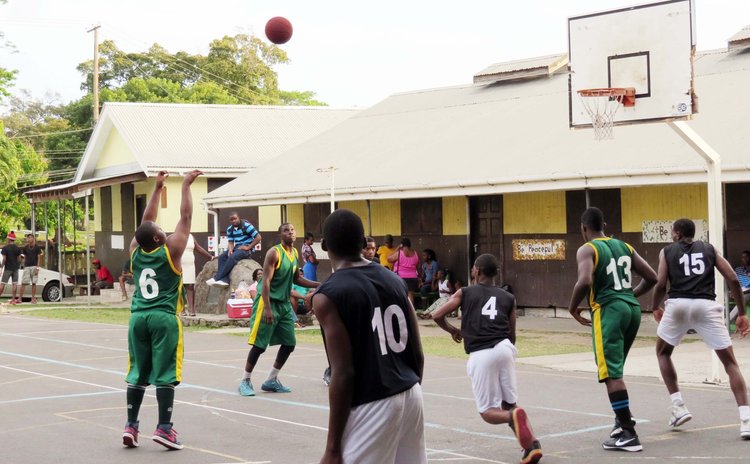 School basketball game in action at the DGS

Basketball in Dominica is organized at three levels: the national level, the community level, and among educational institutions. The administration of the sport at the national level currently falls under the auspices of the Dominica Amateur Basketball Association (DABA), which took over from the Basketball Sub-Committee of the Dominica Amateur Sports Association (DASA) in 1973 or thereabout. Community basketball leagues are organized and run by community associations or committees, and such committees have made or continue to make their contributions to the development of the sport here in areas such as Fond Colé, Grand Bay, La Plaine, Mahaut, Marigot, Massacre, Paix Bouche, Pointe Michel, Pottersville, Portsmouth, Trafalgar, Salisbury, Soufriere, Wesley and possibly elsewhere.

Some secondary schools organize their internal "House" basketball competitions, but currently, the organisation of the sport among educational institutions falls exclusively under the umbrella of the Sports Division. But this was not always the case, as at one time school basketball teams featured on the roster for the national basketball league, initially when the league was played at the St. Mary's Academy, and subsequently when the league transferred to the Windsor Park Hard Court from 1972.

The first two schools to participate in the national basketball league were St. Mary's Academy (SMA) and Dominica Grammar School (DGS) – two of the only four secondary schools on island at the time; those schools began participating in the 1960s. Initially the DASA Basketball League comprised only a single Division (i.e. Division I). A Division II was introduced in 1969, and the DABA started a Division III in 1987.

Both SMA and DGS remained on the annual league fixtures of the DASA then DABA until 1987, with the DGS finally bowing out in 1988. In the 1960s these schools participated in Division I, and by 1987 they had both moved down to Division II. The Dominica Grammar School can boast with much pride, that their Division I team of the early 1970s was the first team to defeat the then seemingly invincible Cardinals in four years, and this they accomplished in 1973. Formed in 1968, Cardinals had not conceded a league championship since their entry into the national league, though they had lost a league match in 1969. The Star Dominica reported then: "D.G.S. shocked the experts and stunned all local basketball enthusiasts by gaining a 7-point win over Caroni Cardinals at Windsor Park, the night of Friday 11th May, 1973". Scores in that historic encounter were DGS – 68, to Cardinals - 61.

During the 1960s and early '70s the teams from the two secondary schools carried names such as SMA Gales, SMA Sharks, SMA Sunsets, SMA Gnats, DGS Stars, DGS Jets and DGS I.

The primary schools were also on the asphalt. Grand Bay Primary School participated, together with DGS, SMA and one non-school team, in the DABA's 16 & Under Competition in 1988 (the Association's only such competition of its kind to date), and Roseau Boys' School was one of the eight teams that competed in the 1989 DABA Division III League.

This year 2016, some twenty-eight years since a school team last competed in the national league, we saw another secondary school team, viz. Eliminate Styrofoam Portsmouth Secondary School, enter the DABA league, in Division I (the lower level/division of the league).

At least one school team so far has participated in a community basketball league. In 2016, one of the teams in the Portsmouth Basketball League was from the Portsmouth Secondary School; this was in preparation for the team's participation in the Schools' and national leagues.

1987 was a turning point in the involvement of schools in the national basketball league. That was the year when the annual Windward Island Secondary School Games was revived, but this time with the inclusion of boys basketball on the cards. And so that year the Sports Division organised the first-ever Secondary Schools Basketball League in which 5 teams participated: DGS, SMA, Dominica Community High School, St. Joseph High School and Clifton Dupigny Community College; St. Mary's Academy won that competition. By 2015 the educational institutions which were participating in the league were the Castle Bruce Secondary, Goodwill Secondary, Isiah Thomas Secondary, North-East Comprehensive, Pierre Charles Secondary, Portsmouth Secondary, Dominica Grammar School, St. Mary's Academy and Dominica State College. Years ago Dominica Seventh Day Adventist Secondary School and St. Andrew's High School also participated.

The involvement of educational institutions in local basketball competitions over the past half-century has come a long way and the "schools" continue to make a significant contribution towards the development of the sport on Dominica. Over the years, with the establishment of courts in many communities around the island, the schools have produced many outstanding players who later went on to play at the highest local level, representing Dominica with distinction at regional tournaments such as the CARICOM Basketball Championships, the Windward Islands Basketball Championships and the Organisation of Eastern Caribbean States (OECS) National and Champion Clubs Championships. A handful of players have also secured basketball scholarships and one remembers Garth Joseph, originally of the SMA, playing in the NBA. One looks forward to the development of the sport at the "grass-roots" level, and to advance the primary school programme beyond the simple mini-basketball festivals stage.