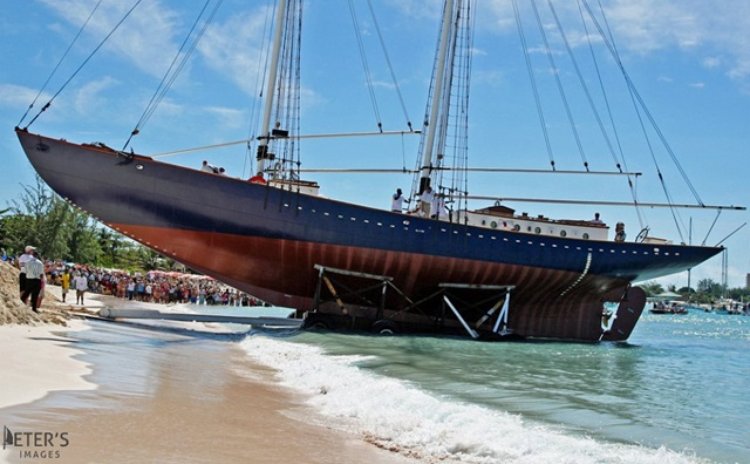 Dominican farmers might soon be able to get their produce to Barbados more readily through a revolutionary shipping programme of the University of the West Indies (UWI) Cave Hill campus.

A Barbados-based "environmentally-friendly" cargo ship is expected to begin an inter-island service before the end of the year, transporting mainly agricultural produce.

According to UWI, the interior of the vessel Schooner Ruth is being fitted out, with the focus on installing solar refrigeration equipment.

The pilot project was first announced in December 2014 by the Caribbean Sail Cargo Initiative of the UWI, Cave Hill-based Centre for Food Security and Entrepreneurship in partnership with SV Ruth Ltd.

"We would now like to get a little more involved from the market systems perspective because I believe that together, we would be able to see the boat sailing between Dominica and Barbados with fresh produce faster," Munish Persaud, the deputy director of the Global Affairs Canada-funded Promotion of Regional Opportunities for Produce through Enterprises and Linkages (PROPEL), said recently. PROPEL has been supporting the Centre for Food Security and Entrepreneurship, providing financing to the tune of US$70,000 and has committed a further US$37,000 in support of the refrigeration and solar components of the project.

Agribusiness marketing consultant at PROPEL Nadia Paquette-Anselm has also been keen on seeing the vessel operate between Barbados and Dominica.

Paquette-Anselm has observed that most of the small vessels operating from Dominica sail north, resulting in the trade in fresh produce from here taking place in the northern Caribbean.

The subject of greater trading in agricultural produce between the two countries was raised in January 2008 at the swearing in of the new Democratic Labour Party (DLP) Government in Barbados.

The then incoming Prime Minister David Thompson, now deceased, announced at the time that he was in talks with Skerrit – who was present at the inauguration - for Dominica to provide Barbados with fresh fruits and agricultural produce as a means of lowering the cost of living.

There has been no movement since, and while speaking to reporters at the 36th summit of Caribbean Community (CARICOM) leaders in Barbados in July last year, Skerrit blamed the absence of reliable transportation.

" . . . this issue of more reliable transportation [is] an issue to the south of Dominica. Dominica supplies every country north of it with agricultural produce but the southern part we are seeking to address it with the purchase of a vessel," the Dominican leader said at the time.

Skerrit has made several promises in the past to acquire a vessel to transport Dominican produce, particularly to the southern Caribbean.

The prime minister announced at a news conference on 21 October 2013 that government was in contact with a group of vessel operators "to determine all the issues needed to be considered in acquiring a vessel" primarily for transporting Dominica's agricultural commodities.

He said at the time, such a vessel would enable hucksters and companies involved in the trade of agricultural goods to take advantage of markets in the southern Caribbean.

"As it is now the transportation south of Dominica is highly compromised and we are unable to take advantage of the markets in Barbados, in Trinidad and other countries because of the inadequacies of the transportation to the south," he said then. "We are in discussion with private sector boat owners, and the intention is that the government will purchase this boat and enter into a management contract with a Dominican who will be able to manage and operate this boat."

Months earlier, in July 2013, the prime minister boasted that EC$4 million had been allocated in the budget for that very reason. He also promised assistance to the existing boat owners to install refrigeration systems to address reports of poor quality produce from Dominica.

In his 2012/2013 budget presentation, Skerrit had also announced that his administration would make available EC$500,000 to those in the private sector who wished to upgrade their cargo vessels or purchase new ones. Skerrit repeated that amount in the budget that he presented to parliament last week.

With government's vessel idea seemingly sunk, the UWI project will likely be a welcome intervention.

"We have some schooners that go south-bound as far as Martinique. We've been trading with Barbados for some time right now, but we've had our bottlenecks as it relates to trade because of some issues relating to vessels and availability of vessels and we recognize that with Schooner Ruth, we can create an opportunity for trade of fresh produce between Dominica and Barbados," Paquette-Anselm said.

The Schooner Ruth has a carrying capacity of 50 tonnes, however, director of SV Ruth Ltd Ian Dash said those behind the project were already looking at a 400-tonne vessel if financing could be secured through the Climate Mitigation Fund.