The bank honours three staff members who worked at the institution from the beginning. 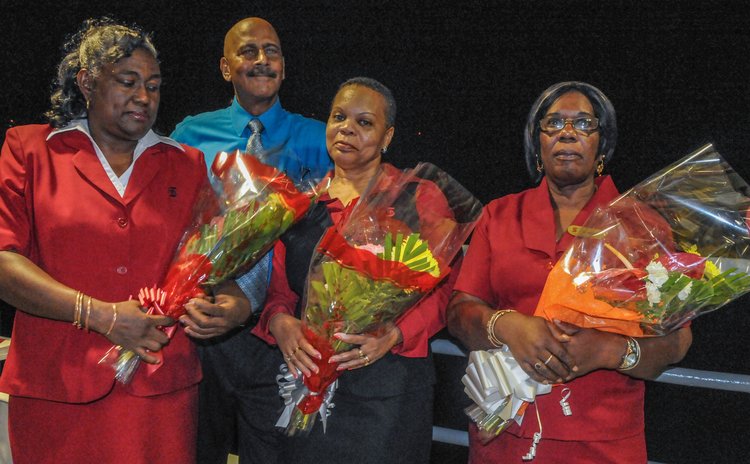 "I can never forget that day," she said. "It was the 4th of July 1988. It was only Mr. Cherebin and myself because the branch really opened in September."

Hannah Mendes must be very proud of her perseverance; she was there when Scotiabank was born on Hillsborough Street in Roseau and twenty-five years later she is witnessing its growth into a major force in the financial sector in Dominica.

Mrs Mendes was one of three members of staff of Scotiabank Dominica who were honoured for 25 years of dedicated service at the bank's 25th Anniversary Cocktail Reception at the Windsor Park Stadium on Thursday evening. The others were: Glendice Paul and Ann Rossi.

"Exactly 25 years ago around this time Scotiabank staff in Dominica had just completed their first day of establishing a legacy," said Alison Stoute, Treasury Manager, Caribbean East of the Managing Director's Office.

Andre Cherebin was the first manager of Scotiabank and he helped build the foundation of the institution. Compared to banking today, Cherebin said, life was quite simple then.

"You put money in as deposits and you lent it out as loans with a small profit," he said. "You never had to be concerned about money laundering and the like. Our first concern was to make our customers happy".

Though the nature of banking has changed in 25 years, the core objectives of Scotiabank remains, said current manager Jim Alston.

"We rely on our staff to give our customers top quality service," he said. "Our core purpose is to ensure that our customers are financially better off."

Scotiabank Dominica, as well as Scotiabank international, have come a long way since the bank started more than a century ago. According to the website Scotiabank.com: "In 1832, the Bank of Nova Scotia opened for business in Halifax, Nova Scotia, to facilitate the thriving trans-Atlantic trade between Britain, North America and the West Indies. Operating for 180 years, the Bank's motto of Strength, Integrity, Service, has formed the foundation of the organization and most importantly its approach to its customers and the communities in which it operates worldwide.

"By 1889, The Bank of Nova Scotia's presence expanded southwards towards the Caribbean with the opening of a branch in Kingston, Jamaica, to facilitate the trading of sugar, rum and fish.

"It was the first branch of a Canadian bank to open outside the United States or United Kingdom and formed the basis of what would become a thriving network spanning some 25 countries throughout the Caribbean and Central America - a footprint that established Scotiabank as the largest bank in the region and a continent-wide enterprise.

"Today, Scotiabank has become Canada's most international bank and is known as Canada's gold bank. From its establishment in a coffee house in Halifax, Nova Scotia, Scotiabank continues to grow and operate with Strength, Integrity, Service, a motto that has formed the foundation of the organization and most importantly its approach to its customers and communities worldwide."