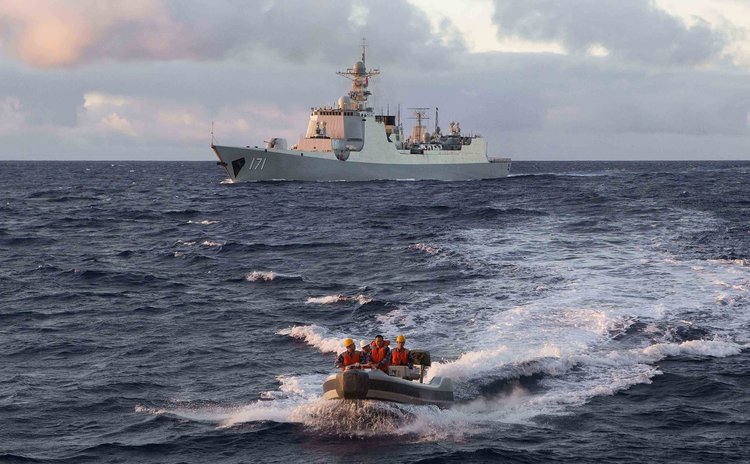 PERTH, Australia, April 12 (Xinhua/Sun) -- Australian Prime Minister Tony Abbott said Saturday the search area for the missing Malaysia Airlines plane had been narrowed to a grid of 40 km by 50 km.

According to a local journalist familiar with the Abbott team, the leader updated a Chinese media outlet on the size of the refined search area after his press conference in Beijing.

Abbott, who has just ended his China visit, told reporters in the past two days he was highly "confident" the signals detected by Australian navy vessel Ocean Shield earlier in the week were related to the missing plane.

"While we have a high degree of confidence that the transmissions that we have been picking up are from flight MH370's black box recorder, no one should underestimate the difficulties of the task ahead of us," he told a press conference Saturday.

The Ocean Shield, which has a U.S. Navy towed pinger locator on board, picked up four electronic transmissions possibly related to MH370 during the week, but no more pulses have been detected since.

The vessel is operating in an area of only 600 square km, about 1,670 km northwest of Perth. That is near where it picked up the acoustic signals and where dozens of sonobuoys capable of transmitting data to search aircraft via radio signals were dropped Wednesday.

Experts say the process of teasing out the signals from the cacophony of background noise in the sea is slow and exhausting.

An unmanned submarine named Bluefin-21 is on board the Ocean Shield and could be deployed to look for wreckage on the sea floor some 4.5 km below the surface once a final search area has been identified.

International search efforts continued Saturday in the southern Indian Ocean, but found nothing related to MH370, a Boeing 777-200 that vanished on March 8 en route to Beijing from Kuala Lumpur, with 239 on board.

Australia's Joint Agency Coordination Center (JACC) said up to 10 aircraft and 14 ships participated in the search of an area totaling 41,393 square km, with its center 2,331 km northwest of Perth.

"This work continues in an effort to narrow the underwater search area for the Autonomous Underwater Vehicle to then be deployed. There have been no confirmed acoustic detections over the past 24 hours," the center said in a press release.

Australia, which is leading the search efforts, divided the search area into two parts, according to the China Maritime Search and Rescue Center.

As to a report in Malaysia's New Straits Times that MH370 co-pilot Fariq Abd Hamid used his cellphone to make a call while the plane was flying low over Penang, a state on the northwest coast of the Peninsular Malaysia, on the day the plane went missing, the minister said he had no information on this.

"If this did happen, they would have known about it earlier," he said.

Malaysia is focusing its criminal investigation on the cabin crew and the pilots of the plane -- 53-year-old captain Zaharie Ahmad Shah and 27-year old Fariq -- after clearing all 227 passengers of any involvement, police have said.

Malaysia's government has also begun investigating civil aviation and military authorities to determine why opportunities to identify and track the flight were missed in the chaotic hours after it vanished.