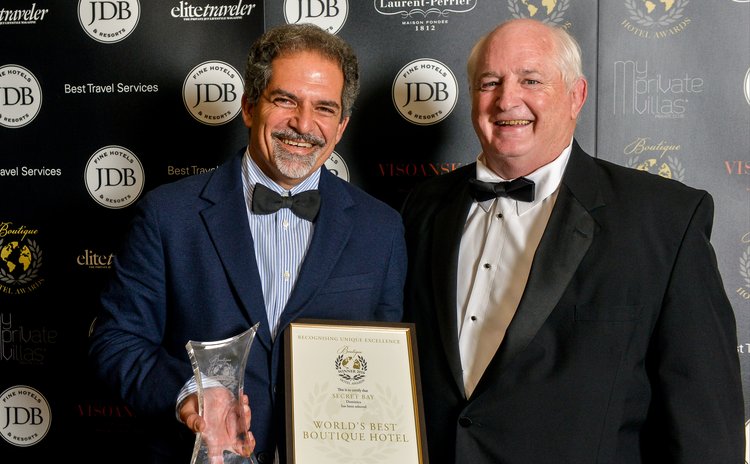 The eight-villa hideaway was honoured as being capable of transporting guests into "a novel world through the history of the location, its culture and its own stylistic flair." The awards were announced on November 9, 2016 at a gala dinner held at Merchant Taylors' Hall in London. Attendees included boutique hotel owners, travel and lifestyle press and influencers from around the world.

"As a relatively new, small and remote property, it's a humbling honour to be awarded the 'World's Best Boutique Hotel' and to be in such impressive company," said Gregor Nassief, proprietor of Secret Bay. "This distinction is shared with the exceptional and dedicated Secret Bay staff, the property's conceptual architect, Fruto Vivas, our amazing 3,000+ guests who have welcomed us into their lives over the past five years, and my wife, Sandra, whose unending support made a world of difference."

The World Boutique Hotel Awards are based on elements of design and concept, dining, facilities, location and service, as well as the overall experience and emotional journey produced by the property.

The 2016 World's Best Category Winners are listed below.

Secret Bay has received more than 30 accolades since opening, including being selected as a recipient of Condé Nast Traveler's Readers' Choice Awards, Condé Nast Johansens' Best Green Hotel 2016 in the Caribbean & Pacific, TripAdvisor's 3rd Best Small Hotel in the Caribbean, and featured as part of Caribbean Journal's Coolest Hotels for 2016 this year.