Selecting Dominica's Head of State: A Game of Musical Chairs

Obviously, Government did not learn from the Alix Boyd-Knights experience 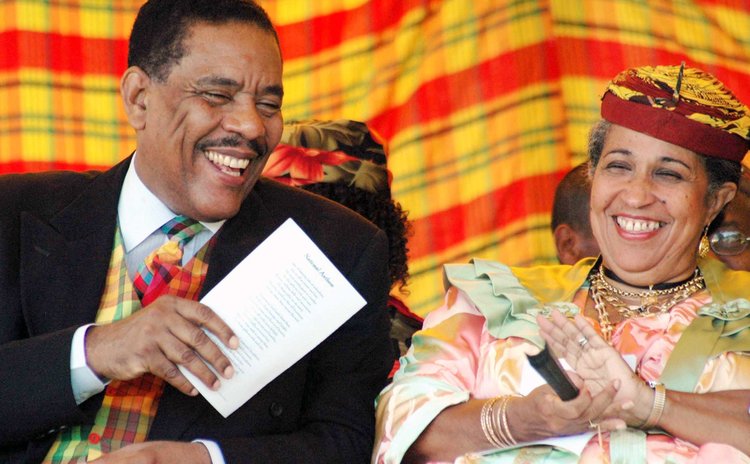 Savarin and Speaker Boyd-Knights at an Independence Day Parade

This appears to be a game of musical chairs, trying to find someone to sit in the president's chair, with the reincarnation of Charles Savarin as president-to-be, wrong-footing everyone who wrote his obituary.

The unctuous Savarin will likely be sworn-in as President of Dominica on Tuesday after government MPs confirm his nomination on Monday. A week ago his name was not in the picture, two years ago few thought he would even be back in parliament.

For Prime Minister Roosevelt Skerrit, Savarin's appointment will be "mission accomplished" – this being his third nominee for what many view as the most dignified position in the country. However, it is unlikely to quell rebellion, and possibly dissention – by those who see Savarin in very much the same light as they viewed the prime minister's first nominee, Alix Boyd-Knights: an ingratiating and sycophantic zealot who will defile the respected post.

Boyd-Knights's nomination provoked such national outcry and outrage that Skerrit and his administration were forced to retreat. The official reason given for her "withdrawal" was fear for her family's safety. But one person involved in the selection process told The Sun it was a fear of losing the next election that prompted a change of heart.

"I expected some resistance but I didn't expect it to be that magnitude," said the source who requested anonymity because this person was not authorized to speak on the issue.

According to this person, the party expected some resistance, but was shocked by the intensity of the revolt and shamed by some of those who led it.

"We've had unpopular decisions before, we've had IMF programmes, but this one has so much emotion…we could not go against the tide with this one. If I tell you the people in the (Dominica) Labour Party who were leading this process you wouldn't believe. These are people who were in Labour before I was born. Trying to push that back would have been (catastrophic)."

Another person who is close to the DLP hierarchy told The Sun that whispers of mutiny were getting louder as leading Labourites showed little taste for a woman many saw as withering and caustic.

In defending herself, Boyd-Knights suggested that there was a feeding frenzy led by unnamed media piranhas who sort to strip her character bare and leave behind nothing but skeletal question marks. She referred to them as "a new species of carnivores …who sit at their console … kill your character, they cut it up in little pieces" and feed it to whoever would listen.

"That is a new form of cannibalism," she said.

But the person involved in the selection process admitted, while Boyd-Knights wanted the presidency – in fact, the person revealed, she was a strong favourite to replace Nicholas Liverpool before the government settled for Eluid Williams – hers was a risky nomination.

"Alix is my friend, we are very close, she's a formidable woman but I take the point; people feel they are looking for some symbols of unity. But I guess we live and learn."

Savarin's nomination raises questions as to whether or not the administration learned any lessons from the Boyd-Knights fiasco. The opposition and some civil society groups have already indicated that they do not intend tolerate what they see as attempts by the prime minister to elevate members of his consiglieri to the presidency.

But the nomination also reflects an inability to attract persons with whom the entire country are comfortable. As one person involved in the selection told The Sun, many of the government's preferred choices have rejected the offer, mainly for personal reasons. As for the man who holds the position today, the source said he had "reluctantly agreed" to complete President Liverpool's term and no more. "Now that he is there maybe he realize it is not as stressful as he thought it would be, he probably changed his mind, but by then it was too late," the person told The Sun before the second nominee,

It was not immediately clear why Williams was not in the conversation again after the latest withdrawal. But it seems that Savarin has returned to life and will be the one sitting the chair when the music stops.