Dominica's Nation Station celebrates its 50th Anniversary; now is the time to privatize the corporation 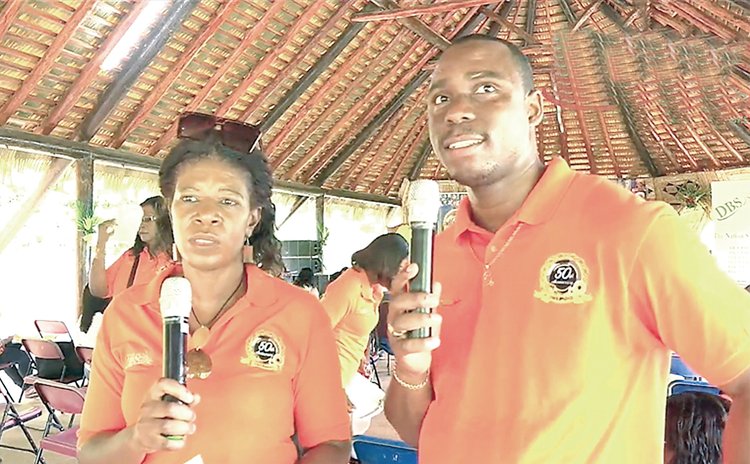 Ivona JnoBaptiste-Lugay leads OB during ceremony at the Kalinago Territory

The year was 1971. Dominica, having attained associated statehood four years earlier on 1 March, 1967, was trying to determine its identity, with Edward Oliver LeBlanc, the island's first premier, guiding the ship.

LeBlanc had survived attempts within his Dominica Labour Party (DLP) a year earlier to oust him – which resulted in a split within the party - and had led his Leblanc Labour Party to victory in the 1970 general election, winning eight of the eleven seats at stake. But his grip on power had been weakened.

Back then, broadcasting in Dominica was limited to 15 minutes of news done from a small room at the back of the public library in Roseau and aired on the Windward Islands Broadcasting Service (WIBS), the Grenada-based short-wave radio network that linked the four Windward Islands.

But with the Grenadian leader, Eric Gairy, "basically commandeering WIBS as if it was the national radio station of Grenada", according to the noted historian Lennox Honychurch, LeBlanc decided as early as 1969 to launch a national radio station, run by the premier's office. Radio Dominica went on air on 1 November, 1971.

"The station originally was supposed to have started November 1, 1970," recalls Denis Joseph, Radio Dominica's first paid employee, who was hired to establish a sales office.

The first announcers were Alvin Knight and Joan Seaman (now Prevost), with Honychurch as a reporter and Jeff Charles as manager. The pioneers who spoke to The Sun avoided criticism of the standard of work produced by today's broadcasters, however, they all agreed that when they began 50 years ago, there was a high degree of attention placed on top quality output.

"Jeff Charles . . . was a stickler for good radio. In other words, good radio meaning proper English, punctuality, having a certain theme to your programming and so on," states Joseph, who went on to manage the station twice, and became one of the most recognisable voices in the country. "In those days the people of Dominica demanded proper radio - I mean they didn't want anybody on the radio who couldn't speak properly or quite a lot of gaps in the production, and that was how it was."

While a lot has changed at the radio station over the years – including the fact that it became a statutory corporation in 1975 and has since been known as DBS Radio – the tight control of the flow of information by various Labour governments remains a constant.

Both LeBlanc and his successor, Patrick John – who became premier after LeBlanc quit in July 1974 – kept a tight lid on things and kept out the opposition's voice.

"We were essentially a voice of the government. So every news item [had to present the government in a positive light] and even when it became a corporation, there was no opening for the opposition voice; you could not carry news items related to the opposition," states Honychurch, adding that there was some relaxation after the Dominica Freedom Party assumed office in 1980.

Many observers will point out the striking similarities between then and now, as today's opposition cries foul over limited access to the 'national station', particularly at election time. And as the station prepares to enter its 51st year, its privatisation becomes a topic of discussion about its future.

The issue has arisen in the past and was under serious consideration by Edison James ahead of the 2000 general election, revealed Joseph, whose second stint as manager was during James' 1995 to 2000 reign.

"He was very keen on it, actually," Joseph told The Sun. "He agreed with me that the station should be privatised, it made no sense having it under government control. However, with elections around the corner I had agreed with him. . . that perhaps we should wait until after the election, so that we wouldn't have all the controversy that will come as to why it's being done at that time. He lost [the election] and that was the end of that."

Admittedly, James concedes, he does not recall the details of the conversation, but he remains firmly in support of the divestment of the state entity, on condition there's continued access to broadcast events of national interest.

"It's something that's worth looking at," contends the former prime minister, "providing the government has some reasonable access that would be available to it so that serious government matters could have some measure of accommodation."

Of the four national stations that emerged after the collapse of WIBS, the entities in Dominica and St. Vincent and the Grenadines remain under government control, Radio St. Lucia has since closed, and Grenada Broadcasting Network was privatised, with the government retaining 40 per cent of the shares.

Kertiste Augustus, head of the country's largest private sector trade body, the Waterfront and Allied Workers Union, argues that a divested DBS could allow for ordinary people to invest in the corporation, helping to make it profitable.

However, he warns of the possibility of the owners determining the content of news programmes, and "that would be, to my mind, problematic, because that would put a label on the entity that is privatised."

Otherwise, Augustus says, the relationship between the trade union and new owners would be similar to that of the union and government "because workers are entitled to representation if they so desire."

Perhaps the best example of successful divestment of a state broadcaster was the Jamaica Broadcasting Corporation (JBC), established as a state owned and statutory corporation to focus on Jamaican culture, but which was accused of partisan journalism by various administrations. The offshoots of JBC have gone on to enjoy varying degrees of commercial success. But this is Jamaica, with a much larger population and economy.

Clive Bacchus, the former Georgetown, Guyana bureau chief for the Caribbean News Agency, and former correspondent for The Associated Press and the BBC, has also run a small private radio station in St. Kitts.

Bacchus tells The Sun it's not as easy as it appears for a private radio station to be commercially viable in small countries like Dominica.

"I don't know of very many successful private radio stations because a lot of the income is coming from just a handful of businesses," says Bacchus. "So in small spaces, it's very difficult to have a virulent, aggressive type radio station if you are not self-sufficient in the context of revenue, and very many stations are not generating the revenue."