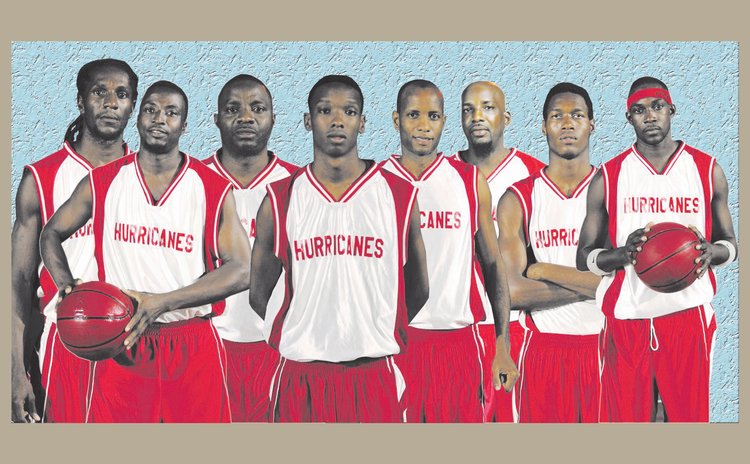 Part I of the article focused on the participation of basketball teams from St. Joseph in the national league, from the late 1980s through 2014. Those were: St. Joseph, followed by Rovers, and currently Hurricanes (men's divisions). St. Joseph Jaguars competed in the Women's Division in 2013.

In 2015, Sen Joe's participation in the national league took another "Time-Out", when no team from the village was on DABA's roster for that season.

Kelver Darroux Hurricanes returned in 2016, playing in Division I (2nd LMD), and had a relatively good season in the most recent completed edition of the national league. That year the Hurricanes, led by Kelver Darroux, had a decent 8-4 Win-Loss record in the Regular League. They blew-out two opponents: Hornets by 22 points (63-41), and more than doubled Thundererz' score with a 45-point pounding (84-39)!

Playing in red-and-white, Hurricanes suffered a 2-point defeat from Inter-Schools (59-61), and also surrendered to Police, LA Knights and Tigers.

With their performance, Hurricanes reached the 2016 Division I Play-Off Finals, but were completely out-maneuvered 3-0 by Police, who denied them Championship honours.

In 2017 Hurricane Maria disrupted Dominicans' way of life, including all sporting programmes. And while the 2017 Basketball League was never completed, Hurricanes had already attained a 3-1 Win-Loss standing.

"In addition to commemorating 'International Day Against Drug Abuse and Illicit Trafficking' which is observed on June 26 of every year, that match was also held in the memory/honor of the late Wilson Languedoc, a son of the soil." Wilson had served as Hurricanes' head coach and passed away suddenly in 2016.

St. Joseph High School was one of the five teams that participated in the inaugural Sports Division's "Schools League" (1987). With the school's name-change some years later, the team now competes as Isaiah Thomas Secondary School (ITSS). Jonathan Mills from ITSS represented Dominica at the Windward Islands Schools Games, and currently plays with Hurricanes in DABA's League.

In the early 2000s, basketball lovers from the West Coast enjoyed an exciting, one-off St. Joseph Basketball League, which was played on the St. Joseph Primary School court.

St. Joseph's basketball teams have not restricted their playing only to the national league and their one-off, "home-grown" league, but have entertained basketball fans around the country.

The Rovers, then Hurricanes, have engaged other teams in "friendlies" at Castle Bruce, Grand Bay, Marigot, Paix Bouche and Wesley.

Importantly, Rovers competed in and won the 1999 Salisbury Basketball League. My informant, Kelver Darroux, was all smiles while disclosing that Rovers had gone through that competition without losing a single match! Hurricanes have also participated in Coulibistrie's League, and in the 2016 Portsmouth Basketball League.

In the absence of a national basketball league the year after Hurricane Maria devastated Dominica, St. Joseph "came to the rescue" and kept the basketball clock ticking with the first-ever Kelver Darroux Basketball League (KDBL) added to their scoresheet. That competition, which was very much cherished by the players, bounced off on Saturday 5th May 2018.

The KDBL, which was run by a Committee headed by Yehudi John and included Sheena Harry and Raymer Francis-Lynch, was sponsored by Parliamentary Representative for the St. Joseph Constituency, Hon. Kelver Darroux, who opted to abstain from playing but assisted with officiating.

Sen Joe continues to make its sterling contribution towards basketball development in Dominica. So, no more Time-Outs!