Senator Cassanni Laville: "I had a choice-to comment from the back seat or seat at the table" 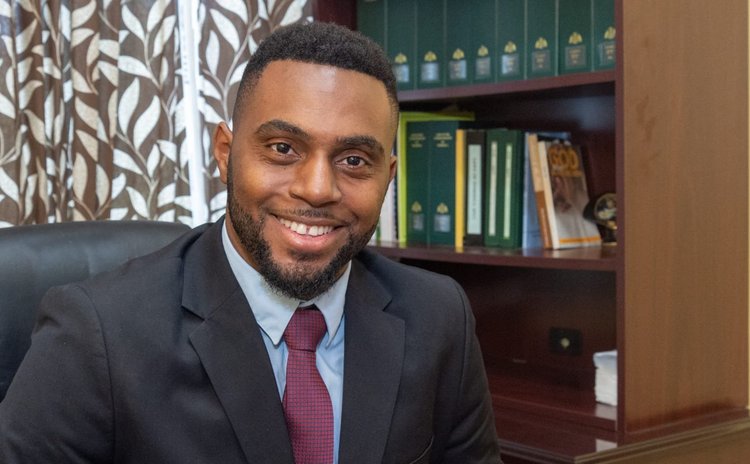 Raised in the community of Mahaut in what he describes as "a close-knit, working class family", Senator Cassanni Laville said his parents always taught him to "be my best self."

And he said that while he, like every human being, has his personal shortcomings, he never doubted the wisdom of his parents, "in our short, God-given time on earth it is our obligation as citizens of this world to not only do well but to excel.

"Growing up, I have been involved in community development including – church, sports, youth and philanthropic activities…my involvement in youth groups exposed me to teamwork and leadership very early. I remember asking my now deceased father to teach me how to chair a meeting as a teenager. He even attended the meeting to observe my performance."

After the December 6, 2020 general election, Laville was appointed to the Cabinet of Prime Minister Roosevelt Skerrit as the Minister of Public Works and the Digital Economy.

In his pursuit to becoming his best self Laville attended the then Clifton Dupigny Community College (CDCC) where he studied information technology. Upon graduation he immediately transitioned to the newly formed Dominica State College (DSC) and graduated with an Associate's Degree in building and civil engineering.

He holds a Master of Science degree in Civil Engineering from the University of North Carolina at Charlotte with specialties in structural and geotechnical engineering. He also commenced a PhD programme there but then stopped when he started his own family.

"As an engineer I have worked in the public sector and private sector. My journey included stints at the Ministry of Public Works, ACE Engineering, and National Authorizing Office for the EDF and as a Technical Consultant in the Office of the Prime Minister. I have also worked in the United States for Geopier Foundation Company and CDR and Associates, a structural engineering company. I have also co-authored publications in the USA in engineering and science topics," he said.

He continued, "Most recently I was the managing director of CORISAV Inc., an engineering, architecture and construction management company where we employed quite a few staff, who are mostly young budding technical professionals. My involvement there allowed me to introduce my creativity by bringing new and innovative services to the field. It allowed me to foster other skills in administration, financial management, teaching, customer service and overall leadership. So this is where the transformation occurred from being a pure engineer to a becoming a rounded consummate professional.

"When I was asked to join the Cabinet of this newly formed Labour Party elected Government I had a choice, a very serious choice…to comment from a back seat and theorize how things should be done…. or to seat at the table and contribute in a meaningful way. I have received far greater from this country than I will ever be able to give; and, for me...accepting the responsibility to contribute in my new capacity as Minister is a mere display of gratitude," he said.

Laville explained that while he has achieved quite a lot as an entrepreneur and his business was his safe haven, "my utopia; I know and I trust that God is in control.

"And while the task to build a dynamic Dominica is significant, I am faithful that it will be done, and I am encouraged to do it. Courage is that virtue that transforms doubt into belief that fosters inner strength and makes nothing of the impossible. So, I want to inspire all Dominicans to be courageous and let's continue working together to build and rebuild our nation into a place where our children will be safe and proud," he said.

Minister Laville said that his mission is aimed at instituting policies and regulatory measures and execute programmes to improve the infrastructure in roads, utilities, energy, the digital economy and strengthen services in transportation, service administration to stimulate and support sustainable economic growth for the overall benefit of the people of Dominica.