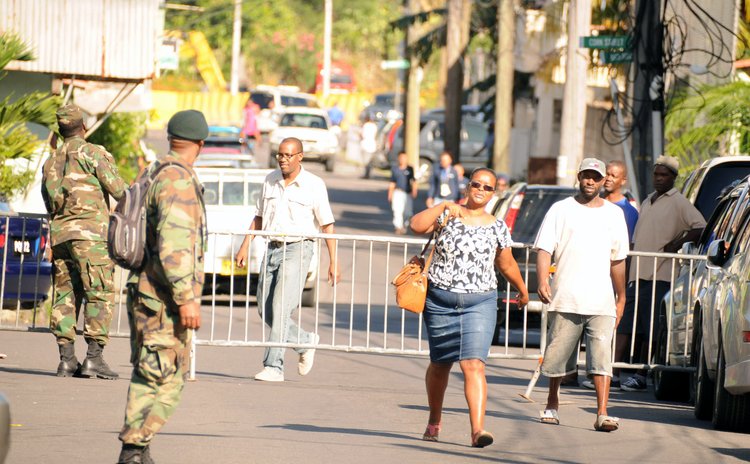 Apparently in good spirits after his ordeal yesterday, just after 9.00 am this morning Senator Dr. Thompson Fontaine walked to police headquarters to continue his interrogation by police officers over allegations that Fontaine plotted to overthrow the Skerrit administration last week by using a large truck loaded with sound equipment to storm government headquarters on Kennedy Avenue. Derisively, the opposition has called the charge "coup by truck."

Police picked up Dr Fontaine yesterday at about 2.30 pm after he had completed a radio programme on Q95 radio on Hanover Street, Roseau.

Dr. Fontaine, a member of the opposition United Workers Party (UWP), was part of a protest meeting held on Tuesday last week against the government's management of the Citizenship by Investment (CBI) programme and the issuance of diplomatic passports to persons who later ended up on the wrong side of the law.

A few hours after the protest meeting ended hordes of rampaging youth burnt garbage in the streets, looted stores and broke glass windows in Roseau, the capital. Police used tear gas to control the situation.

Throughout the weekend there were rumours that the police were out to arrest leaders of the UWP including Fontaine and Lennox Linton, the leader of the opposition in Dominica's parliament.

"As soon as I stepped out of the station (Q95FM, where Fontaine hosts a radio programme) I saw a government vehicle and immediately five officers in camouflage stepped out," Dr. Fontaine said. "I was patted down like a common criminal; they asked me did I have any gun on me, if I had any drugs

"They told me they were investigating a plan to overthrow Skerrit and I was one of those being investigated."