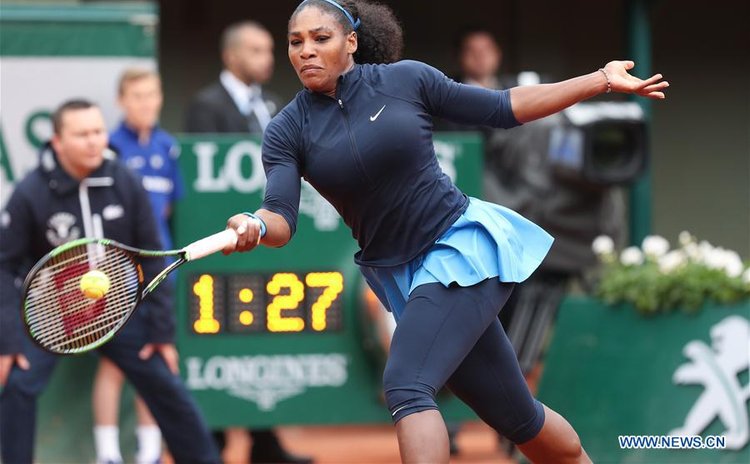 Serena Williams competes during the women's singles semifinal match with Kiki Bertens of the Netherlands on the 2016 French Open tennis tournament at Roland Garros, in Paris, France on June 3, 2016.

Djokovic, seeking his first Roland Garros title to complete a career slam, crushed his Austrian opponent 6-2, 6-1, 6-4 in one hour and 48 minutes.

The 29-year-old Serb almost met no trouble from the outset, breaking the Thiem at the 22-year-old' s first serving game before breaking twice in the second set.

Thiem, however, roared back from the beginning of the third set to break Djokovic and take a 3-0 lead before the top seed reeled off five games in a row to deny the youngster' s effort.

Djokovic, who' s already won the year' s opening major at Melbourne, later better proved himself the kind of man with stern mind and steady performance, served out the match for his sixth straight slam final.

The Serb rated the semi his "best performance of the tournament" .

"As I was hoping after the long fourth round that I'm going to start playing better as the tournament progresses, and that's what's happening now," he said. World No. 2 Andy Murray saw off defending champion Stan Wawrinka 6-4, 6-2, 4-6, 6-2 in the other semifinal, and the Scot became the first British man to reach the Roland Garros final since Bunny Austin in 1937.

While Murray playing Wawrinka in Court Philippe Chatrier, Djokovic' s match against Thiem simultaneously was taken to Court Suzanne Lenglen, which was unusual for the French Open men' s singles semifinalists to play at the same time.

After too many rain delays and a washout on Monday for the first time at Roland Garros in 16 years, the clay-court major has been forced to make a compressed schedule in the second week.

Comparing with her counterparts of the men' s singles, Serena Williams and her opponent in Saturday' s final face an even tighter schedule, as no rest of a full day for the women' s finalists as they did in other years.

On Friday, the three-times champion Serena Williams went just one match away to her 22nd Grand Slam title after setting up a 2015 Wimbledon final rematch against Garbine Muguruza.

Williams was obviously well below her best level, starting both sets with her first serving game broken and committing 31 unforced errors against Bertens' 19 throughout the semi but managed to go through.

She came back from 4-2 down in the first set to force a tie-break though the 58-ranked Bertens, who handed a first-round exit to Australian Open champion Angelique Kerber, earned seven break points and two set points.

The 34-year-old again fell at two dreadful volleys, one of them on set point, but dragged herself through from one break down to took control of the second set.

The world No. 4 Spaniard jumped to a 4-0 first set lead against her 32-year-old opponent before rounding it in one hour and 16 minutes at the Court Suzanne Lenglen with large areas of empty seats though organizers offering 8,000 cheap tickets of 20 euros.