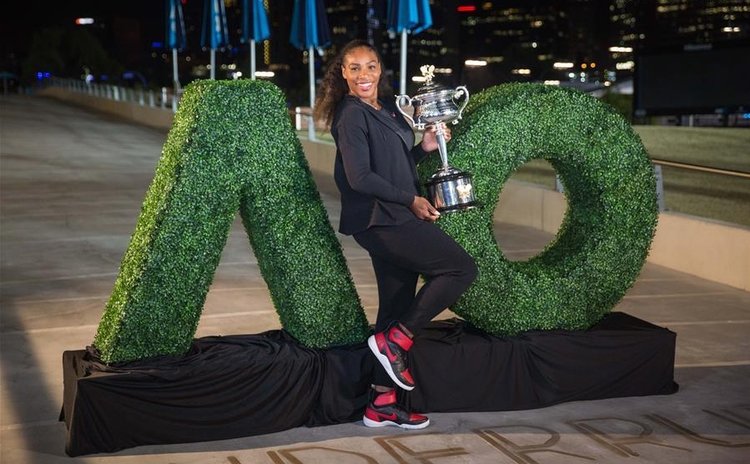 MELBOURNE, Jan. 28 (Xinhua) -- Serena Williams won her 23rd grand slam title in straight sets to regain her world No. 1 crown, defeating elder sister Venus in 82 minutes to claim the Australian Open title on Saturday as celebrations for the Year of the Rooster begin.

An error prone opening where neither player could hold serve until Venus in the fifth point crescendoed into a code violation against Serena for smashing and breaking her racquet into the court. The release of frustration helped the newly crowned champion however, with both women regaining composure until Serena broke at 4-3 with a cross-court winner, holding serve for the rest of the set.

"I didn't think I hit (the racket) that hard," Serena told local television network Channel Seven after claiming the Australian Open crown 6-4, 6-4, discussing the dynamics of the early stress against Venus.

"This (was) by far my toughest match, she's such a great opponent."

The sisters again had chances to break each other's serves early in the second set, however aggression on either end ensued, leading to the longest rallies of the match and balls being pushed just wide of the tape.

Serena eventually capitalised on a Venus mistake to break serve at 4-3, before holding off a resurgent world no. 17 who had the opportunity to break back in just the next point. Though the crowd was overwhelmingly Venus to respond to the pressure and send it to a third, she had a miss-hit off her forehand to give Serena match point, before sending the ball just wide off her backhand.

"I feel like I had opportunities, for sure, (but I) just missed some shots," Venus told reporters.

"But it's not like I missed shots that I wasn't going for, I went for those shots. It's a matter of inches.

"Some errors here or there can mean the difference between a break of serve or a hold."

It's the first time the sisters have played each other since the quarter final of the 2015 U.S. Open and the first time in Melbourne since their all-Williams final 2003, where Serena won on both occasions. Serena also holds the ledger over her younger sister winning 17 of their 28 meetings, including Saturday's Australian Open final.

Serena regains world No. 1 crown from Germany's Angelique Kerber who fell in straight sets to American Coco Vandeweghe in round 4 and overtakes Steffi Graf to become the second most crowned women's singles players, an impressive feat for someone born in 1981, also the Year of the Rooster.

The world No. 1 heads home Sunday to begin preparations for Indian Wells in March, disparaged she'll miss watching the battle between Roger Federer and Rafael Nadal to claim glory in the men's final, but hoping the form continues.

"I was feeling good about my game, I don't want it to stop, I want to keep it going," Williams told reporters, adding she isn't yet thinking about the prospects of a calendar grand slam.

Saturday's final was Venus' first since Wimbledon in 2009, where Serena too defeated her in straight sets. Wimbledon played host to Venus' first semifinal appearance in nearly eight years in 2016, a great comeback after taking time off court to recover after being diagnosed with with Sjögren's Syndrome 2011, an autoimmune disease that causes fatigue and joint pain.

"I feel motivated to continue, to continue to go out there and hit the ball the way I know I can," Venus said, adding she's "ready to kill it this year, that's my goal."

"I feel I played very well this week, pulled a lot of things out of my pocket... (but) I got more stuff in my pocket."