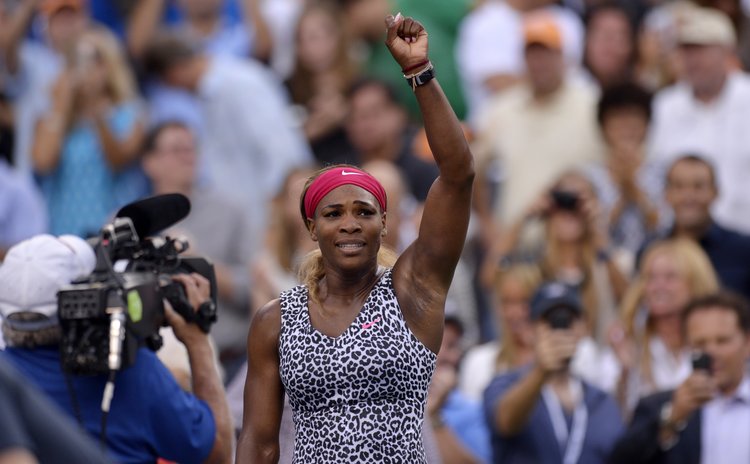 NEW YORK, Sept. 8, 2014 (Xinhua) -- Serena Williams of the United States celebrates after the women's singles final match against Caroline Wozniacki of Denmark at the 2014 U.S

It was the 18th Grand Slam champion for Williams. She tied Chris Evert and Martina Navratilova for the fourth-most WTA titles in history.

"It means a lot to me," said Williams. "I just could never have imagined that I would be mentioned with Chris Evert or with Martina Navratilova, because I was just a kid with a dream and a racquet, living in Compton, you know. This never happened before."

The ceremony was an emotional one. Williams tried hard to stop her tear from coming out.

Williams struggled to keep her first serve, followed five straight breaks. Taking a 4-2 lead in hand, Williams went on to win the eight and tenth game to close the first set 6-3.

The second set saw a 2-0 Williams lead again. The two players held serves until Williams broke Wozniacki in the ninth game to win the match.

"None of the matches are easy," said Williams, who never needed more than two sets to win any match at the tournament. "Even today if I would have lost a game I would have been serving for it.

Williams had a aggressive match. She had as many as 29 winners throughout the match, while Wozniacki only had four.

It was the second Grand Slam final for Wozniacki. The 24-year-old Dane reached U.S. Open final in 2009, but lost the match to Kim Clijsters.

"When she's on her game it's not fun to play her," said Wozniacki.

"She's so strong. She has a good serve and she puts pressure on you straightaway.

"You know, today I went out there and I was a little nervous. I had a game plan in mind, but it was kind of difficult at the start. I tried to push her back, but that really didn't work for me. She really just stepped in and she was playing aggressive. She was playing better than me today."

Williams won four million dollars because of this victory, three million for winning the tournament and one million bonus for leading the U.S. Open Series.