Government has been sued for the widespread looting after Hurricane Maria 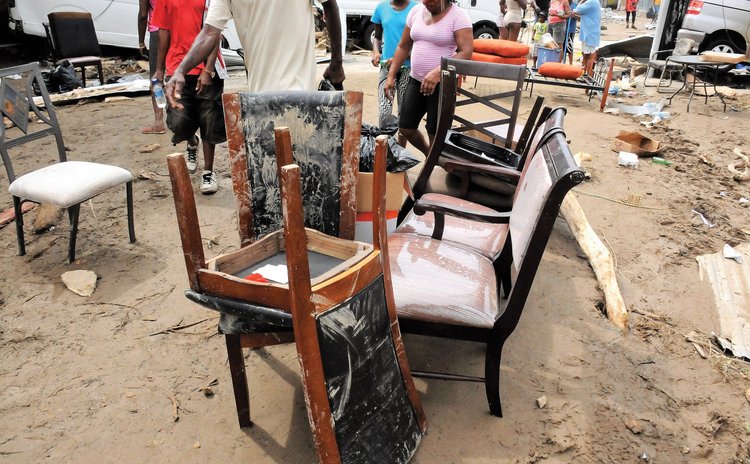 Looted furniture on street outside Courts

They are on their way to court.

Six business owners in Roseau, the victims massive looting after Hurricane Maria have filed a lawsuit against the Commissioner of Police, the Minister of Justice, Immigration & National Security and the Attorney General for "breach of statutory duty and negligence."

Filed court documents obtained by the SUN show that all six claimants whose businesses were broken into and looted are taking the matter seriously. The court documents stated that said that "the looting which was occasioned to their respective business places continued unchecked for a significant period thereafter and was directly caused by the defendants' collective breach of statutory duty and or negligence."

In their Statement of Claim, the owners of the businesses say the police had assured the nation in a statement that "the police had made all the necessary arrangements and put in place all mechanisms and would be ready to respond in full force to any emergency or accident and to ensure that persons with criminal intent would not be given the opportunity to commit and acts of lawlessness in the city and or island wide."

The court documents further added that the failure of the police to "preserve the good peace; prevent looting in the Claimants business places and other institutions thereby creating an unsafe and lawless environment and negligent and a breach of their statutory duties."

"The looting was reported to police officers, members of the Force in the direct vicinity of the area who were unwilling and refused and failed to assist," the statement of claim said.

The business owners stated that police officers who were visibly armed were seen walking and standing within sight and hearing of some of the business places being looted and made "no attempt to stop the looters."

The Government, they said, held no commission of inquiry into the acts and or omissions of the Police Force and indicated an unwillingness to do so.

"Further, the Government has made no offer of compensation or other amends to the Claimants, even after requests were made verbally and in writing," the court documents stated.

The business owners are asking the court for a declaration that the Defendants breached their statutory duty under the Police Force Act during the period September 18 to 30, 2017. And their action or lack of action caused "loss and damage to the Claimants." Also, the court should further declare that the Defendants were "negligent towards the Claimants" during that period.