Séwinal —a must for Atkinson folks 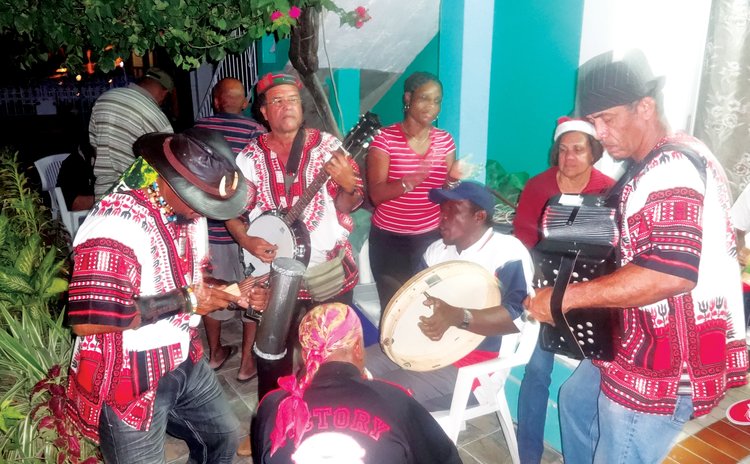 The Bann Akayo Group in action

It happens at a particular time every year.

In the weeks leading up to Christmas and on Christmas Eve, a group of singers and 'jing ping' musicians travel from door to door in the village at night.

Householders are serenaded personally inside their homes, then the roving musicians move on to the next house.

This activity is called 'séwinal' and it dates back to the days of slavery.

Once it was popular throughout Dominica, but today the tradition only lives on in a few communities.

Gregory Rabess and his group, 'Bann Akayo', are key players in the annual séwinal at Atkinson where the tradition is synonymous with Christmas.

A séwinal band comprises a core group of jing ping musicians and a small group of male and female singers.

One such song is "Alé di yo nou wivé" which means " go and tell them we have arrived". Another first-song is "Jan Waraka Lévé".

"It's a sort of rousing song," Rabess explained, "You are in front of the door and you want to rouse the people because they are…fast asleep."

A member of the group then gives a speech, greeting the householders, identifying the séwinal band that is outside and asking to be let in.

More songs follow the speech. Rabess said the songs are sung in English, Creole or a combination of the two languages.

These instruments are the accordion, the traditional drum which is like a large flat tambourine, cyak and the boom-boom -- a length of bamboo that provides the bass sound.

Other traditional instruments are the banjo, violin, guitar and harmonica and sometimes the steel-pan.

Once inside the house, the band performs for the householders and there are jokes as well as dancing and generally lots of fun.

The householders are expected to reward the performers with drinks and goodies.

"And sometimes if the people are taking too long to bring out the drinks, we have a song for that too…" Rabess said.

After a little chit-chat, the group sings a good-bye song and moves on to the next house.

On an average, the group visits about six houses per night starting between 11:00pm and midnight.

"The whole idea is to hit the homes at the dead of night. It is part of the magic, the mystique…people are fast asleep in their beds and are, all of a sudden, awakened by this loud chorus," he said.

Rabess himself has fond memories of waking up to séwinal music when he was a boy.

According to him, Atkinson, the Kalinago Territory, Petite Savanne, Petite Soufriere and Paix Bouche are the last places in Dominica where the séwinal tradition is still being kept alive.

Séwinal has been affected by a shortage of musicians who play the traditional instruments, and also by the economic situation because some householders can't afford to provide the usual treats.

Moreover, some persons are reluctant to let the séwinal bands into their homes because at one time shadowy characters infiltrated the groups and used the activity to steal from householders.

Since being launched in 1991, the band released a recording called "Mizik Séwinal" comprising 10 traditional séwinal songs as well as an introduction speech.

Rabess, who is committee chairman, said the event features séwinal bands from multiple communities, other traditional bands, dancers, and even a Miss Noel pageant.

However, he disclosed that the festival will be smaller this year because many participants come from communities that were hard-hit by Tropical Storm Erika.

Bann Akayo remains busy throughout the Christmas season, performing at private functions and other events wherever they are invited. Every Christmas Eve, Bann Akayo kicks off séwinal in Atkinson after Midnight Mass and continues until about 11:00am on Christmas morning.

They take a break for lunch with their families, resume at about 2:00pm and continue for as long as they can.

"Everybody looks forward to the band, especially on Christmas Eve and Christmas Day. . . In my community, Christmas without séwinal, it's like no Christmas at all," Rabess said.

"Yes, you have the spiritual aspects, but if you put that aside, the séwinal …is what puts you in the mood, creates the atmosphere, sets the ambiance," he asserted.

On Christmas day, the séwinal band is transformed into a mini-Carnival band with a number of villagers joining in the fun.

Traditionally, séwinal starts from November 24, but sometimes it starts before or after.