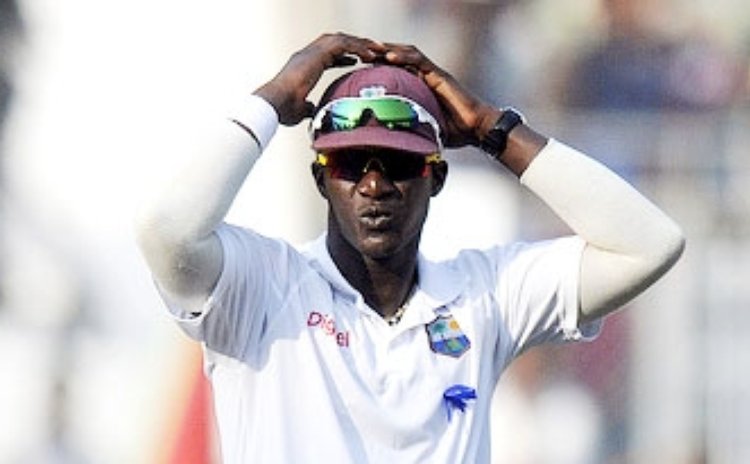 MUMBAI, India – Two wickets for Shane Shillingford failed to ease the pressure on West Indies, after they were bowled out before tea and India got within sight of a first innings lead in the momentous second Test on Thursday here.

Shillingford continued to be the Windies' most effective bowler on this trip, grabbing 2-46 from 12 overs, as India reached 157 for two, replying to West Indies' first innings total of 182, at the close on the opening day at the Wankhede Stadium with retiring batting great Sachin Tendulkar, playing 200th and final Test, not out on 38 and rookie Cheteshwar Pujara not out on 34.

This followed another batting collapse – this time triggered by left-arm spinner Pragyan Ojha – that saw the visitors lose their last seven wickets for 42 runs in the space of 89 deliveries between lunch and tea.

Kieran Powell hit the top score of 48 and all of the West Indies' top seven batsmen reached double figures, but none of them carried on, as the visitors, sent in to bat, were dismissed about seven minutes before the scheduled tea break.

Before a crowd that included legendary former Windies captain Clive Lloyd and President of the West Indies Cricket Board Dave Cameron, the Caribbean side were undermined by their eternal bane of spin, as Ojha ended with 5-40 from 11.2 overs and off-spinner Ravichandran Ashwin finished with 3-45 from 15 overs.

West Indies then spent the evening session chasing leather, as India's batsmen made use of the easing conditions.

The Windies were put under early pressure, when openers Shikhar Dhawan and Murali Vijay shared 77 for the first wicket.

But Shillingford snared them in the space of three deliveries, when he had Dhawan caught at deep mid-wicket for 33 and Vijay caught at leg-slip for 43.

The visitors formed a guard of honour to welcome Tendulkar to the crease with accompaniment of a loud roar from a crowd that nearly packed out the stadium that is reminiscent of a cauldron.

Shillingford caused Tendulkar a few nervous moments with a few deliveries played near the close, but the little master gradually found his feet and started to bat with the fluency that has been the hallmark of his 24 years at the top.

The result was that West Indies spent the remainder of the evening catching at shadows, as Tendulkar and Pujara comfortably put on 80 for the third wicket.

West Indies hopes for a strong start had taken a dent, when they reached 93 for two at lunch, after Chris Gayle and Darren Bravo fell.

Gayle, playing his 99th Test, was caught at gully for 11 in the first half-hour after the Windies were sent in to bat on an unusually helpful, grassy pitch, when he played back defensively to a delivery from Mohammad Shami that popped from a good length.

Bravo joined fellow left-hander Powell and they eased the pain of the early loss, when they put on 61 for the second wicket.

Fortune favoured them both, when Bravo, on four, edged Shami just short of second slip fielder Murali Vijay, and Powell, on 21, edged Kumar to first slip, where Ashwin put him down.

In between their mis-steps, the two young left-handers batted with confidence. Bravo got into gear, when he drove Shami elegantly through cover for his second four, and Powell typically looked in fine touch with his first boundary, a languid off-drive off Kumar, showing his class.

The two young left-handers appeared to be batting for the interval, when Bravo was caught behind for 29 off Ashwin, playing defensively forward to a delivery that spun and bounced.

After lunch, West Indies suffered an early set-back, when Powell essayed a whip and was caught at short leg off Ojha, when the ball lobbed from the pad from a thin inside edge in the third over after the interval.

This brought Shivnarine Chanderpaul to the crease. Playing his 150th Test under the maroon cap, he and Marlon Samuels stitched a stand of 43 for the third wicket to stem the fall of wickets.

But Samuels was caught at slip off Ojha for 19, when he played defensively forward to a delivery that spun sharply, setting the collapse in motion.

Chanderpaul was unable to mark his momentous appearance with a milestone innings, falling three overs later caught at first slip for 25, when Bhuvneshwar Kumar squared him up and found his edge with a well-pitched delivery that moved across him.

Narsingh Deonarine, one of two changes to the Windies line-up, was fortunate on 12, when Pujara dropped him at slip off Ojha, but he was soon caught at gully for 21, playing defensively forward to Ashwin.

West Indies captain Darren Sammy emerged with his side 162 for six and lasted just two balls before he was caught at short mid-wicket off Ashwin for a duck, essaying an ill-advised slog/sweep.

After this, there was little or no resistance from the tail-enders, as Ojha brought the innings to a close, when he had Shannon Gabriel caught behind for one to claim five wickets in an innings in a Test for the sixth time.

West Indies brought Deonarine and Gabriel in to their line-up to replace Veerasammy Permaul and Sheldon Cottrell. India were unchanged.

Prior to the start, Tendulkar and Chanderpaul, the two most durable batsmen on either side, were celebrated.

Two stamps depicting Tendulkar, playing his 200th and final Test for India, were unveiled by a local government minister.

N. Srinivasan, president of the BCCI, the Indian board, also presented the home team's batting hero with a painted portrait and a specially-minted gold coin featuring Tendulkar, which was used for the toss.

West Indies captain Darren Sammy presented Tendulkar with a framed, autographed West Indies playing jersey and India captain Mahendra Singh Dhoni gave him a special cap with the number 200 embroidered on its peak which he used instead of his usual floppy hat.

Chanderpaul, playing his 150th Test for West Indies, received a team cap with the number 150 embroidered under the WICB logo and commemorative plaque from the regional governing body, both presented by legendary former West Indies captain Clive Lloyd, like Chanderpaul, a native of Guyana.

West Indies trail 0-1 in the two-Test series, following an innings and 51-run defeat inside three days in the first Test that ended last Friday at Eden Gardens in the eastern Indian city of Kolkata.