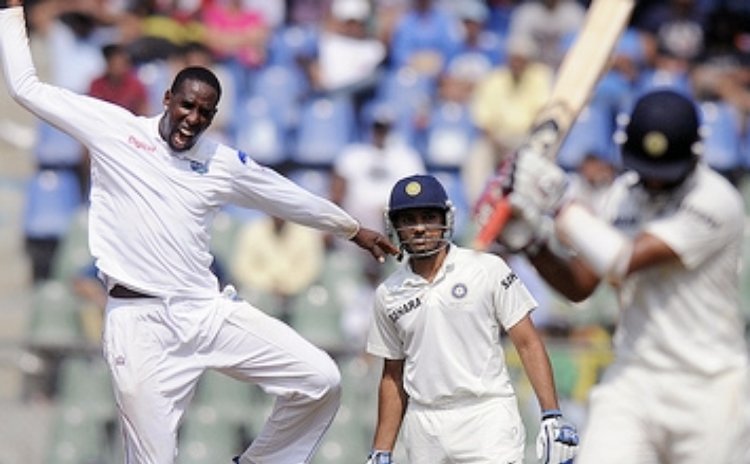 MUMBAI, India – West Indies ended another eventful day in an uneasy position on Friday, following another tireless spell of spin bowling from Shane Shillingford that was trumped by hundreds from Cheteshwar Pujara and Rohit Sharma that put India on course for victory in the second Test here.

The wickets of opener Kieran Powell, night-watchman Tino Best and left-hander Darren Bravo left the Windies facing an uphill struggle to save the match at the Wankhede Stadium, after they closed the second day on 43 for three in their second innings, still 270 in arrears.

Shillingford again had been the pick of the West Indies bowlers, collecting 5-179 from 43 overs, as Pujara gathered his fifth Test hundred of 113 and Sharma hit his second straight, an undefeated 111 to lead India to 495, replying to the visitors' first innings total of 234.

West Indies were left to navigate 14 overs before the stumps were drawn and ran into early difficulty.

In the space of 37 balls, Powell was caught at long-off for nine off Ravichandran Ashwin, essaying an ill-advisedly lofted off drive, Best was dubiously adjudged lbw to an arm-ball from left-arm spinner Pragyan Ojha for the same score, and Bravo was caught at slip off Ashwin from a cut for 11.

Chris Gayle battled through it all and was not out on six with his compatriot Marlon Samuels set to follow when play resumes on Saturday's third day.

Before lunch, Deonarine and West Indies captain Darren Sammy forever had their names etched in history, when they linked up to dismiss Tendulkar, as India reached 282 for three at the interval.

To the disappointment of the thousands of fans of the little Indian master batsman in the stands and following the game around the World by any form of modern technology, Deonarine, whose off-spin has proven valuable in his 14 previous Tests, had Tendulkar caught at slip by Sammy for 74, trying to guide a delivery to third man.

Deonarine raced towards cover in jubilation and Sammy sank to his knees, as Tendulkar trudged away disappointed, his hope for fairy-tale departure hundred dashed, following a stand of 144 for the third wicket with Pujara.

Tino Best had engaged in a fierce battle with Tendulkar, whose silky off-drive past the bowler for his ninth four brought him his 50 from 92 balls, and consecutive fours off Shillingford in his 13th over also had the Tendulkar touch of class about them.

After he departed, West Indies continued to fight for wickets, but India's batsmen simply dug in – and Pujara was fortunate on 76, when he turned a delivery from Shillingford to forward short leg and Powell appeared to take a catch.

After several replays that suggested a clean catch and what seemed an eternity, West Indies hopes for another important breakthrough before the interval were ruined, much to their consternation.

After lunch, West Indies found more success, after Virat Kohli raced to 50 from 53 balls and put on 94 for the fourth wicket with Pujara before he was caught at slip off Shillingford for 57.

More success was to come for the Caribbean side, but Pujara reached his hundred from 145 balls, when he swept Deonarine for a single behind square.

West Indies again met resistance from Ravichandran Ashwin when he joined Sharma and coolly got 30 in a stand of 44 for the seventh wicket before Shannon Gabriel ended his plans of another back-breaking innings, taking a return catch from a top-edged hook, as India reached 409 for seven at tea.

After the break, West Indies had early success, when Shillingford claimed five wickets for the sixth time in his 12 Tests, when he had Bhuvneshwar Kumar caught at slip for four before Kieran Powell's direct hit from deep mid-wicket at the striker's end ran Pragyan Ojha out for a duck, leaving India 415 for nine.

Things however, fell apart for West Indies after this, as fortune favoured Sharma and he farmed the bowling, batting with last man Mohammad Shami, to inch his way to his second hundred of the series from 117 balls and a stand of 80 for the last wicket.

Shillingford thought he had Sharma and six wickets for the second straight Test, when the batsman swung him to cow corner and Deonarine moved under the ball to hold a tumbling catch – but umpire Llong asked for the dismissal to be reviewed and Kulkarni spotted a no-ball from the West Indies off-spinner.

Shillingford was also in the thick of things in the next over, when Sharma, on 87, flicked Best to long leg, but the lanky West Indies off-spinner failed to see the flight path of the ball and it fell safely for the ninth of the batsman's 11 boundaries.

A six off Marlon Samuels' uncomplicated off-spin carried Sharma over the threshold before Deonarine wrapped the innings up when he had Shami caught at deep backward square leg for 11.

C. Pujara c and b Shillingford 113

B. Kumar c Sammy b Shillingford 4