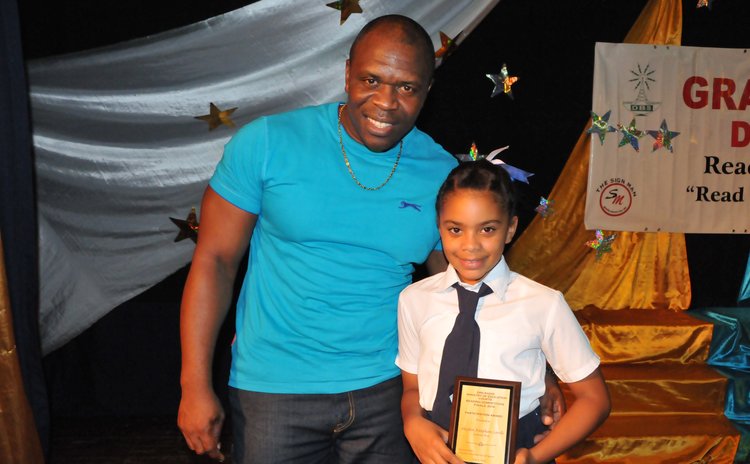 Shayden Laville, 9, of the Convent Preparatory School has won the DBS Radio, Ministry of Education, Courts Reading competition, the final of which was held at the Arawak House of Culture on July 6, 2016.

Shayden received a cheque of $2,000 and another $2000 for her school. Shayden will represent Dominica in St Kitts later this year at the Courts, OECS Reading Competition.

She told reports that she felt "very surprised and very happy" that she won the competition.

She added that her preparations for this competition started long ago; her parents suspended television viewing, using cell phones, iPad until she read for at least an hour.

Her father Paul Laville said: "I am so proud of this young girl, she has worked hard over the past weeks for this competition; she wanted it badly so I am really happy she came out on top; it was a tough competition."

He said Shayden is a hard worker and he did not have to push her too much for this competition.

"Shayden is somebody you ask her to do something, she does it well," he said.

Shayden also received help from Lousie Aaron who won the competition in 2014.

In second place was Tiana Smith of the Wills Strathmore Stevens Primary School, while the third place went to Samuel Miah of the Lighthouse Christian Academy. The students will be awarded $900 and $700 respectively.

In fourth place was Tyrick Jean-Jacques of the St. Luke's Primary School and in fifth place was Buzjah Betrand of the Roseau Seventh Day Adventist School.

Each student will receive $500, a tablet, and a plaque.

Ten schools competed in the finals.

Meanwhile, Connie Matthew, the Country Manager of Courts Dominica said: "We have remained steadfast in our commitment to foster and champion continuous reading at the primary school level across the OECS and we are pleased to announce that there has been tremendous improvement in the reading capabilities in our youth over the years."

She said Government has seen the need to heighten the interest in reading at the primary school level.
Matthew stated that too often there are children within the communities who cannot read and write.

"We at Courts are very determined to push this agenda forward working hand in hand with DBS and various education departments across the island for its continued success," she said.

Matthew added that Courts understands that the ability to read is the key to achieving a better quality of life and if the importance of reading is not encouraged, the youth cannot enjoy life's simple pleasures.

"It is critical for us to especially target 8 – 9 age group as we believe that this is the ideal time to capture their imagination and develop their abilities," she said.